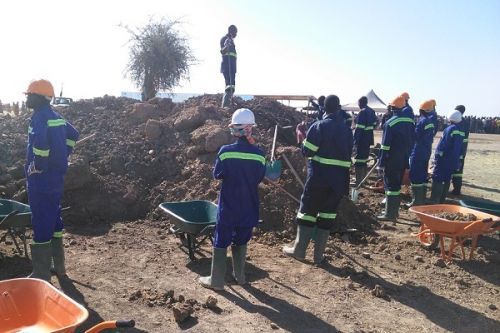 The French Development Agency (AFD) has granted the Cameroonian government more than CFA9 billion to finance 23 micro-projects in 18 communes in the Far North. This financing, drawn from the "Minka Fund", is dedicated to the High-Intensity Labor Operation (Himo) for the realization of community works: agricultural tracks, artificial ponds, etc. The Himo approach favors the mobilization of local workers.

The Himo Minka project is based on the Himo II operation conducted by the National Participatory Development Program (PNDP) with funding from the European Union's Emergency Trust Fund (ETF) in 20 communes and on the pilot experience under Himo I with C2D/AFD funding in 6 communes in the Far North.

At the initiative of the PNDP, the staff of the selected consulting firms and those of the Mission for the Promotion of Local Materials (Minpromalo), the other partner in the Himo approach, met from May 26 to 28 in Gazawa, in the Far North region. The objective of this meeting was to "proceed with the maturation of communal projects, to harmonize the understanding of the process and especially to clarify the roles of each stakeholder," said Charles Boubé, PNDP contracting specialist.

Launched in 2017, the Minka Peace and Resilience Fund is AFD's tool dedicated to peacebuilding. Endowed with €250 million, Minka is designed to support the prevention of violent conflicts and crisis exit. Minka is implemented in the Sahel, in countries around Lake Chad, in the Central African Republic, and the Middle East.