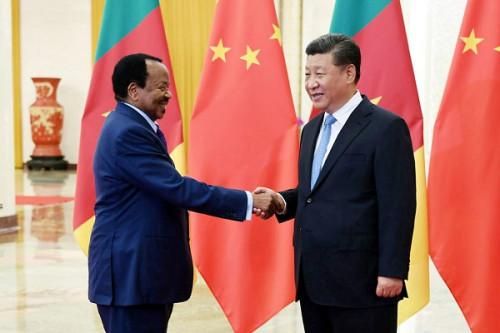 Donations, cancelations, and deferment: China is taking measures to lighten the burden of its debt on Cameroon but…

On May 4, 2021, the Minister of Economy, Planning, and Regional Development (MINEPAT) Alamine Ousmane Mey and Wang Yingwu, the Chinese Ambassador to Cameroon, signed two economic and technical partnership agreements.

According to the Minister, the first agreement is a XAF25 billion unconditional pledge to fund development projects to be identified and agreed upon by the involved parties. The second agreement officializes the cancellation of some interest-free loans, worth XAF10 billion, canceled in 2020.

"These highly commendable actions by the Chinese government are carried out in the framework of the promises made by the Chinese President during the Beijing summit and the virtual extraordinary China-Africa Summit on solidarity against COVID-19," the MINEPAT explains. "The two documents we signed are very important in the relations between our Countries (...). They will support Cameroon's efforts to develop its economy and improve its residents’ living standards,” Ambassador Wang Yingwu said.

This is not the first time China is canceling Cameroon’s debt. Indeed, according to the national sinking fund CAA, in 2019, China canceled about XAF21 billion debt Cameroon was to service in 2018. That same year, China decided to allow Cameroon to defer the repayment of a XAF148 billion debt beyond its service deadline (between July 2019 and March 2022), Alamine Ousmane Mey explains.

In 2020, according to CAA, under the Debt Service Suspension Initiative (DSSI), China deferred the repayment of nearly XAF30 billion debt Cameroon was owing. Also by end-March 2021, China had already deferred the payment of an additional XAF15 billion that should have been repaid this year. Those debts can now be serviced from 2022 to 2025.

Despite all those initiatives, the amount of debt Cameroon has to repay to China every year is still the highest debt service that the country has to budget for, regardless of the type of debt. According to the CAA, in 2020, Cameroon serviced XAF117 billion to Cameroon. That same year, the next highest debt it serviced was the XAF38 billion it paid as interest on the Eurobond it issued in 2015.

Let’s note that as of March 31, 2021, Cameroon’s debt to China was XAF1,931.2 billion, representing 61.9% of its bilateral debts and 28.2% of its foreign debts. Therefore, the XAF31 billion canceled barely represents 1.6% of the current debt stock owed to the Middle Kingdom.

Army Sergeant Ulrich Azambou Tankeu was sentenced on Monday to one year in prison by...