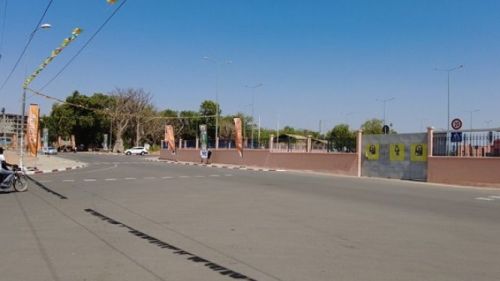 Garoua, the regional capital of the North, was selected to host Pool D matches during the 33rd edition of the Africa Cup of Nations. In preparation for that continental football event, over 33 kilometers of road were rehabilitated, much to residents’ delight.

In Roumdé-Adja, in front of the eponymous stadium, Koue Oumarou runs a store whose cleanliness contrasts with the dusty walls of the neighboring district. "There is a road here, so, there is no longer dust that can make my store dirty… I can keep my store clean now… You see, even gutters (meaning puddles) and the fetid smells that used to drive clients away are things of the past," he explains delightfully.

Indeed, in preparation for the 2021 Africa Cup of Nations, the main road in this popular neighborhood of Garoua was rehabilitated. Drainage pipes were also built along an almost 2-kilometer stretch.

"Our road was so dusty and bad that some motorcycle drivers rather make U-turn to avoid it. Our neighborhood has changed now. People are no longer afraid to venture out thanks to the streetlights and the more passable road. We couldn't hope for better," says Moussa Blaise, a Roumdé-Adja resident.

Thanks to the postponed football competition (initially scheduled for 2019), 33.3 linear kilometers of roads were rehabilitated in Garoua, informs Boubakary Toumba, regional delegate of the Ministry of Housing and Urban Development in the North. The rehabilitation works notably included maintenance, paving, construction, and renovation of access roads to stadiums, hospitals, and hotels in the city. Engineering structures were also built, as well as drainage systems.

For instance, to facilitate access to hospital and hospitality infrastructures, a 12-kilometer stretch was asphalted leading to the complete renovation of the Place des Fêtes-Crossroads 6-Ngoulou Bridge-Garoua Reference Hospital Center road section. A bridge was also built on the road section leading to the Bénoué and Relais Saint-Hubert hotels.

The overall amount of the works have not been disclosed yet but part of the funds was provided by the Regional Capitals project under the Debt Reduction and Development Contract (C2D). Over 4 km of roadways were rehabilitated through this project, while the other 29 km were rehabilitated with public funds.

"Because of our proximity with the Benue Hotel, we thought our roads would be developed. Some demolition works were carried out, machines and a construction team were in our neighborhood but nothing since then and the Africa Cup of Nations will soon be over,” laments Farouk Ibrahim, a Demsaré resident. He was expecting the construction of roads and gutters for the disappearance of potholes and the puddles that usually facilitate the proliferation of malaria-transmitting mosquitoes. But this wish failed to come true.

To residents like Farouk Ibrahim, whose wishes are yet to come true in Garoua, Boubakary Toumba promises more works are coming.

"We have rehabilitated 33.312 linear kilometers of roads. This does not mean the works are over. After the AFCON, we will identify secondary roads to be rehabilitated, estimate the volume of funds required for the works and send that estimate to our hierarchy,” he explains.