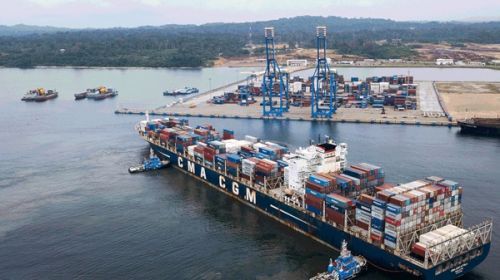 The port of Kribi recorded 457 stopovers in 2020, up 17% from initial previsions

The Port Authority of Kribi (PAK) reported on January 7 that it recorded a total of 457 stopovers in 2020, 17.7% higher than 376 stopovers initially planned.

According to the MD of the port authority, Patrice Melom, this over performance, achieved despite the coronavirus pandemic, was supported by the swift implementation of a response plan, including a strategic readjustment. He said, “traffic forecasts were met, new operators continued to set up, whether they were stevedores or agents, and finally, new shippers and receivers have placed their trust in the port of Kribi."

Patrice Melom said the port met initial customs revenue (CFA70 billion by the end of 2020). "This is a milestone, since we started with one billion annual revenue without this port platform in 2017, to 9 billion in 2018; a first-year in which we operated for only nine months. In 2019, which was the first full year of operation of the port, customs recorded $24 billion," Melom said.

In 2018 and 2019, the port of Kribi recorded 295 and 331 stopovers respectively, according to data provided by the Asia-West African coast (Asaf).

Cameroon's second largest port after Douala - through which 90% of goods still pass in the country - the port of Kribi based in the South is presented by experts as one of the most strategic on the entire West African coast.

The second phase of construction of the port provides for the establishment of a second container terminal, with 750 meters of quays, and two other terminals, mineral and hydrocarbon. This is expected to further boost the port's performance.