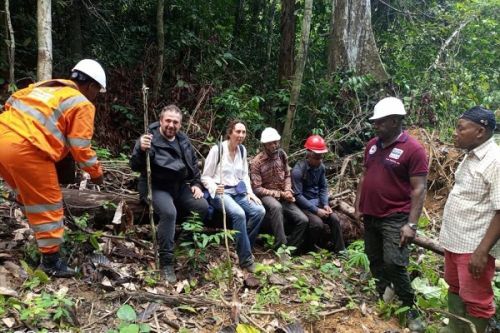 The project to build the Somapan hydroelectric power station on the Nyong-et-Kelle River, in Biyouha, was presented last September 10 in Yaoundé. Construction work is entrusted to Belgian company Turbulent NV, whose delegation already visited the site.

The infrastructure will generate 1 MW of electricity for the more than 10,000 people living in the commune. The estimated cost is CFA400 million. "The potential is huge in terms of hydroelectricity. The river is perfect for our technology. There is a lot of water here. And the three- to four-meter waterfalls are perfect for installing our turbines," said Maria Zeman, an expert at Turbulent NV.

The work will consist of "identifying a location near the waterfall and installing the turbines according to the water flow at that location. We will use the natural level that exists next to the river to install the turbine. It is a technology called vortex where we use the gravity of the waterfall," she explained.

The mayor of Biyouha, Paul Henry Ngue Ngue, hopes the project will improve access to electricity for households in this municipality, and encourage the creation of industrial units. Welcoming the initiative, the divisional prefect of the town said: “We are convinced that the current project will transform the daily life of our people. We recommend to the actors of this project to be serious (...). We will assist the with the project. We are available and willing to see this project to completion.”