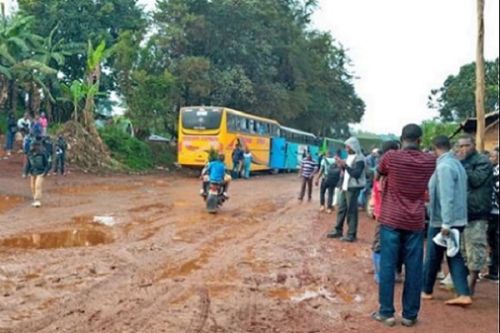 In an international call for tenders published on October 6, the government announced it is seeking a firm for the construction of the 17-km  Babadjou-Matazem section, which is part of the 52-km Babadjou-Bamenda highway connecting the West to the Northwest.

In the call, the Ministry of Public Works, which is the project owner, indicates that the construction will be funded by the World Bank, through a loan from the International Bank for Reconstruction and Development (IBRD). As for the Cameroonian government, it will take care of the taxes related to the project.

The government launched this tender procedure after negotiations failed with Sogea-Satom, initially contracted for the construction.

Indeed, in 2017, Sogea-Satom was selected to rehabilitate the Babadjou-Bamenda road, which was in a seriously dilapidated state. However, in September that year, the company suspended works because separatists were attacking its infrastructure and threatening its staff. It resumed works on the site months later but stopped again on January 14, 2020, after a deadly attack against it a week earlier.

In June 2021, while providing an update on the situation, Minister of Public Works Emmanuel Djoumessi explained that with their modus operandi, which consists notably of kidnapping, murdering, and harassing the population, separatists have succeeded in raising fear among the population and causing  Sogea-Satom to lose interest in the construction works.

Despite the government's assurances, the company refused to resume work and at the same time demanded the patent of XAF5 billion claims from the government.

During his visit to the Northwest a week ago, Prime Minister Joseph Dion Ngute promised that construction works would resume on the abandoned section by end of October.

"Once back in Yaounde, I will meet with the three contractors and works will start immediately. I can assure you that works will begin before the end of this month," he said on October 5.

Later, on October 11, the Minister of Public Works met with Abdoulaye Seck, World Bank director of operations in Cameroon, and discussed the road section. According to the Ministry, speaking on the possibility of resuming works on the section, Abdoulaye Seck explained that the two parties (the government of Cameroon and the World Bank) are determined to complete such major infrastructure projects but they also had to take some measures and steps.