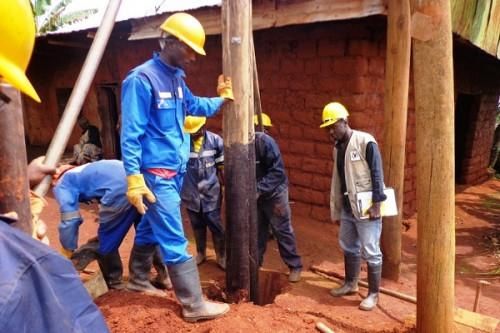 The electricity access rate should soon improve in six regions in Cameroon (the Far North, North, Adamaoua, North-West, South-West and East). On June 12, in Yaoundé, a $150 million (about CFAF87.8 billion) loan agreement was signed by Ibrah Sanoussi, representative of the World Bank's Director of Operations in Cameroon, and Alamine Ousmane Mey, the Minister in charge of the Economy (Minepat), in the framework of Perace (Projet d’électrification rurale et d’accès à l’électricité dans les régions sous-desservies), a project aimed at boosting access to electricity in underserved regions.

This project, which will be implemented over five years, will enable the extension and reinforcement of the electricity network. It will do so through the construction of power lines and transformer stations in 417 new localities. This will provide electricity to more than one million people in the rural areas concerned.

"This project will benefit not only electricity consumers but also the underserved population through job creation and improvement of the prospects for shared prosperity in Cameroon," the Minepat said.

"Improved access to electricity is a key factor in generating income and employment, and fostering productive uses of electricity in rural areas, "Alamine Ousmane Mey added.

According to data provided by the Minepat, the electricity access rate in underserved regions is barely 50%. For example, the Far North has a rate of 46%, the North 46%, and Adamaoua 52%. The World Bank notes that only one person in two has access to electricity in rural areas in Cameroon. To address this, the government adopted the Rural Electrification Master Plan in 2017, paving the way for improved access to electricity in these underserved areas.