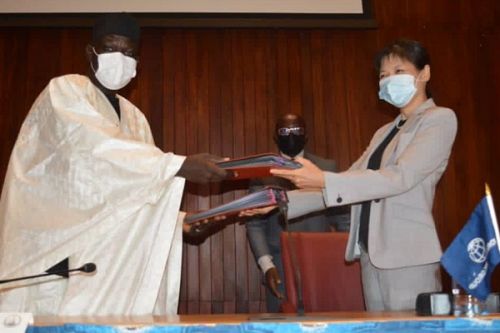 Thanks to this agreement, XAF54.182 billion will be directly injected into the country’s public treasury, “therefore improving its financial situation amid the significant challenges,” Minister Alamine Ousmane Mey said.

According to Keiko Kubota, the loan agreement is to support the government’s efforts during the pandemic and the ambitious reforms it is implementing as well as improve the living conditions of the whole population: the poor, and the most vulnerable notably.

During the signing ceremony, the MINEPAT reminded that the loan agreement is the third and last budget support in the framework of a series of three.

These disbursements are made to support various reforms initiated by Cameroon. For instance, to reach the third agreement, Cameroon had to initiate fiscal and economic measures to ease the impacts of the coronavirus pandemic. It also took several actions for the management of the coronavirus response fund, assigned performance objectives to electric utility ENEO during its concession period and granted concessions to CAMTEL for the exploitation of a mobile telecommunication and transport network to make internet costs more affordable.

According to figures published by the Ministry of Economy, in Cameroon, the World Bank’s current project portfolio is $1.746 billion (close to XAF986.49 billion) for fifteen active projects. Also, five projects and an additional financing scheme, all worth $722 million have already been approved by the World Bank’s executive board and the agreements relating to them could be signed anytime soon.