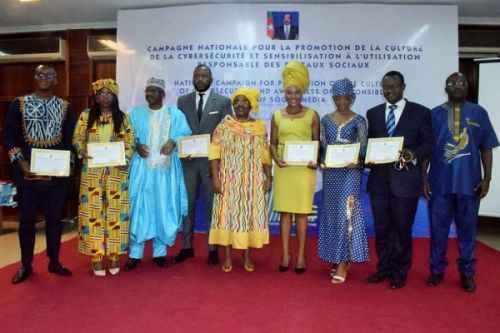 "These ambassadors, with their fame and prowess in their respective fields of expertise, will carry the message of the campaign for the responsible use of social networks by explaining to cyberspace users that they must remain responsible citizens who protect their country and families," Minpostel explained.

According to Minette Libom Li Likeng, it is also their responsibility to raise awareness of the legal provisions in force among the populations. In other words, these cybersecurity ambassadors have the role of publicizing the government's actions to protect citizens in the use of electronic communications networks.

"We have the opportunity to reach out nationally and internationally, and today as a goodwill ambassador for cybersecurity, I will give everything I have to be able to touch hearts with my music. I would tell them to be careful, and to put Cameroon first because when we get dirty in the virtual world, we taint our country," reacts Sanzy Viany, artist-musician.

The president of the National Youth Council of Cameroon (CNJC), Fadimatou Iyawa Ousmanou, said the issue most concerns young people who represent more than 60% of the nearly 25 million Cameroonians. Knowing that young people use social networks a lot, the president of the CNJC is committed ‘to reaching out more to our youth peers through our representations in the 360 communes, 58 departments, and 10 regions to raise their awareness.’

And to do this, "we plan to go to schools, markets, wherever young people are physically present to make them responsible for a patriotic and civic use of social networks," she says.

The appointment of these goodwill ambassadors is part of the national campaign to promote the culture of cybersecurity and raise awareness of the responsible use of social networks to mobilize all levels of society to fight against cybercrime in Cameroon.

In 2019, the National Agency for Information Technology and Communication registered 2,050 complaints about scamming and phishing, 11,617 vulnerabilities on the websites of public administrations. Overall, bank losses and frauds related to cybercrime amount to more than CFA11 billion.