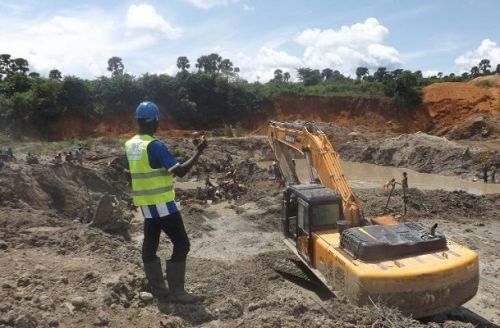 During a press briefing on February 17, 2021, Claude Hyepdo Simo (coordinator of the Mining, Environment, Health, and Society Project for Transparency International Cameroon) suggested a set of measures to reduce illicit practices in the country’s mining sector.

He reminded that the statutory instruments of the December 2016 mining code have still not been signed, therefore facilitating several illicit practices in the mining sector.

According to Claude Hyepdo Simo, the obvious manifestation of these illicit practices is the non-existence of semi-mechanized artisanal mining authorizations while most of the companies in the field fall into this category, he commented.

As he points out, by continuing to claim to be artisanal miners, these companies can avoid the environmental, fiscal, and socio-professional requirements semi-mechanized artisanal mining companies should abide by.

He also suggested that decentralized local authorities should be in charge of the distribution and management of mining revenues since the municipalities where mining companies operate have never received a dime from the activities carried out in their jurisdictions.  "Yet the number of companies operating in the field is growing. These companies destroy the living environment of local populations with impunity under the inoffensive and sometimes complicit gaze of local administrative authorities," he added.

For the coordinator, the publication of mining licenses and beneficial owners is one of the EITI’s requirements that help identify the people that won the companies those licenses are granted to.

He believes that the publication of the licenses and beneficial owners will be enlightening because the mapping of integrity deficits conducted by Transparency International Cameroon and the association Forêt et Développement rural (Foder) reveals a strong involvement of administrative authorities, political elites, and even the military in the mining sector. According to the mapping, they represent foreigners (Chinese mostly) operating in the field.

However, Claude Hyepdo Simo explains, the mining sector may no longer be the catalyst for infrastructure and energy development and the vector for coherent endogenous industrialization presented by the National Development Strategy 2020-2030 (SND30) recently adopted by the government.