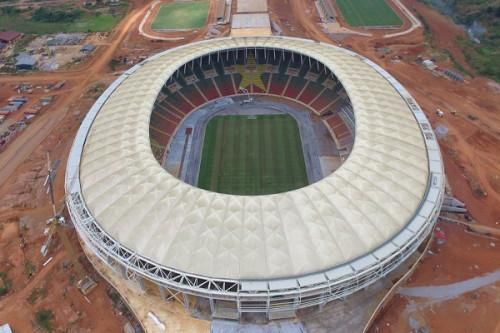 The general public in Cameroon is currently questioning the use of the XAF163 billion raised for the construction of the Olembe Sports Complex in Yaounde. The questions were heightened by the presidential Decree N°2021/100 of February 16, 2021, authorizing the MINEPAT (Minister of Economy, Planning and Regional Development) to sign a new loan agreement to the tune of XAF55.16 billion to fund the completion of the remaining construction works in the framework of the same infrastructure.

The presidential decree revived the embezzlement suspicions surrounding the construction of this sports complex, launched on March 7, 2017. "The extremely high amount of this credit agreement is bewildering and may raise strong suspicions of fund misappropriation," wrote MP Jean Michel Mintcheu, a member of the opposition party Social Democratic Front (SDF). The opposition member wrote this in a letter he sent on February 19, 2021, to Ferdinand Ngoh Ngoh (Secretary-General of the Presidency of the Republic) who he presented as the "president of the AFCON 2022 task force."

The new loan included, the overall funds raised for the construction of Olembe Sports Complex will amount to over XAF218 billion while the initial cost estimate was XAF163 billion. The initial estimate (XAF163 billion) was secured in August 2016, through three loan agreements signed with Nigerian bank UBA (XAF24.5 billion) and Italian bank Intesa Sanpaolo (XAF138, 538 billion).

Because of the government's silence on the use of that fund, citizens like the SDF’s elected representative who suspect fund misappropriation assume that the credits have been consumed. Also considering the remaining construction works in the framework of the project, the budget extension authorized by the President of the Republic is "extremely high."

Nevertheless, in late 2020, the Parliament adopted a XAF55 billion budget extension for the "continuation of the construction works at the Olembe sports complex" inscribed in the medium-term expenditure framework (2021-2023) annexed to the 2021 finance law. The decree signed by President Paul Biya is based on this budget extension authorization. Moreover, for 2021, the finance law budgeted XAF16 billion to be injected into the project, including XAF1 billion from own resources and XAF15 billion from external resources.

After compiling information from several economic assessments and budget documents, one thing became clear: the credit granted by Nigerian bank UBA has been fully released.  However, there is no certainty about the credit granted by Intesa Sanpaolo. Even at the Ministry of Sports (the project owner), which is in charge of sports infrastructure development,  not much information can be obtained about that credit.

"The actors in charge of the preparation of the Minsep budget document have always pointed at how difficult it was to ensure the financial monitoring of major externally-funded (Finex) AFCON projects, notably the stadiums in Olembé, Japoma, Roundé-Adja in Garoua," informs the final technical validation report of the medium-term expenditure framework (2021-2023). The CPIP-CDMT (the unit responsible for developing the priority investment program and medium-term expenditure frameworks at the Ministry of Economy), which wrote the report, indicates that the difficulties appear because the financial monitoring is carried out by "different institutions." It does not provide further details on those institutions nevertheless.

What is known so far is that the credit obtained from Intesa Sanpaolo is governed by two distinct financing agreements, which are listed on the list of the 243 loan agreements annexed to the 2021 Finance Act. The two agreements include a "commercial credit" of XAF27.027 billion and a "buyer credit" of about XAF111.52 billion. As far as the buyer credit is concerned, it is an agreement whereby a financial partner promises to provide the borrower with funds it needs to pay a specific supplier. In the present case, Intesa Sanpaolo is promising to provide Cameroon with the funds necessary to pay Piccini, the successful bidder for the Olembé sports complex construction contract.

The termination, on November 29, 2020, of Piccini’s contract should have logically resulted in the cancellation of XAF111.5 billion buyer credit and the suspension of disbursements.  In a post on his Facebook page, Eloi Cyrille Tollo (a senior lecturer reputed close to the secretary-general of the presidency of the republic)  claimed that only XAF 113 billion was disbursed (out of the overall XAF163 billion) when the construction contract with Piccini was terminated and a new one signed with Canadian firm Magil.

However, some previous facts somehow make his statement seem inaccurate. For instance, in late July 2019, Makonnen Asmaron, CEO of Piccini came to Cameroon to request a guarantee agreement to raise "additional financing" from local banks for the completion of that infrastructure whose initial delivery date was September 2018. Less than two months later, Minister of Finance Louis-Paul Motaze granted an audience to Henri-Claude Oyima, CEO of BGFIBank. At the end of the audience, Louis Paul Motaze declared that Piccini would receive additional funds to complete the construction works.

Moreover, in its note on public debt published in October 2020, the national sinking fund (CAA) reveals that the last disbursement made by Intesa Sanpaolo (which is by the way involved in other projects) for Cameroon was in the first months of 2019 and amounted to XAF13.119 billion.

Status of construction work at the Olembé sports complex (according to the report presented before the national assembly by the Prime Minister on November 25, 2020)

Note: The Prime Minister’s presentation now mentions a 4-star hotel instead of the initial 5-star hotel. In addition, it makes no mention of the gymnasium, the Olympic swimming pool, the museum, the movie theater as well as the tennis, handball, and basketball courts.