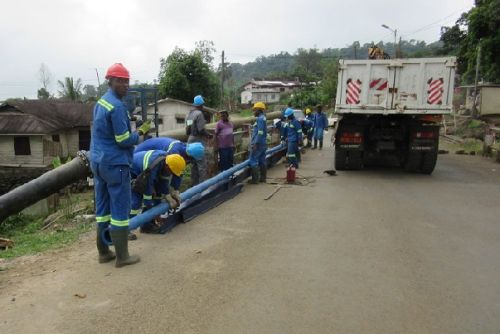 The Cameroonian government announced it will soon launch feasibility studies for the project to rehabilitate and extend the drinking water supply network in the cities of Buea, Mutengene, and Tiko. A financing deal of CFA3 billion was signed yesterday in that regard between the Ministry of Economy, Planning and Land Management (Minepat) and U.S. partners.

According to the ministry, the funds to implement this CFA54 billion project will come from Deutsche Bank-New York and the US Eximbank. Specifically, "the project will allow, in the three localities, to increase the level of the daily production of drinking water to 30,000 m3, expand the transport and distribution network over 288 km and finally strengthen the storage capacity to 16,000 m3 of water," minister Alamine Ousmane Mey explained.

For Akawoh Minerva, the 3rd deputy mayor of Buea, "this project will benefit the entire community. Because of the crisis, people are coming from other regions and we did not have enough water for everyone.”

Cameroon has 213 drinking water treatment centers; all managed by Cameroon Water Utilities (Camwater). "To date, the public company manages 116 equipped and operational centers, 98 treatment stations, and 32 recovery stations. It has an installed capacity of 824,484 m3 per day, a total storage capacity of 268,532 m3, and production efficiency of 93.5%. The network covers 7,372 km and the total number of subscribers has reached 476,181,” according to Gaston Eloundou Essomba, the Minister of Water and Energy.