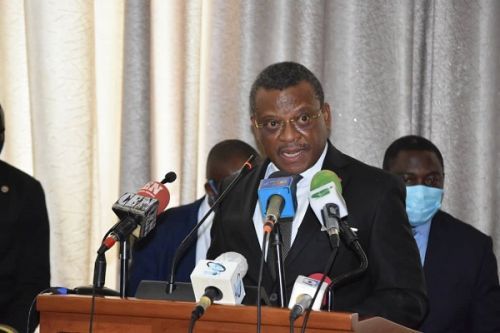 Economics, politics, society: Here are the government’s main projects for Cameroon in 2021

According to the presentation, the programs to be implemented by the government (thanks to a budget estimated at XAF4 865.2 billion) will depend on the evolution of the Covid-19 pandemic, which is so far controlled but not yet defeated.

For the time being, the government’s main goal is to revive the economy, which was deeply affected by the pandemic.

It also announces that 98 kilometers of the Yaoundé-Douala and Kribi-Lolabé highways, and 423 kilometers of new asphalt roads will be completed. The construction of some important highways (such as Ebolowa-Akom II-Kribi) launched during the financial year will also be completed.

Prioritize the reconstruction of Sonara

During his presentation, the Prime Minister indicated that the government would do whatever it takes to start reconstruction works at the national refinery Sonara. The costs of the works are estimated at XAF250 billion. Apart from rebuilding the plant destroyed by a fire outbreak on May 31, 2019, the country will also increase its oil storage capacity.

Also, the government will continue with the implementation of the plan to restructure Camair-Co and complete the feasibility studies for the construction of the Ngaoundéré-Ndjaména railway line.

The budget also provides for water and sanitation projects (through the launch of a program to rehabilitate 350 Scanwater stations in the country) and an increase in infrastructures in the education sector. In addition, the country will digitize teaching and strengthen the fight against drug use and violence in schools.

During the 2021 fiscal year, the country plans to finalize the draft of the bilingual Civil Code, the bilingual Code of Civil and Commercial Procedure, and the draft law on the enforcement of alternative sanctions.

While consolidating decentralization through the operationalization of the special status of the Northwest and Southwest regions, the government is determined to finalize the texts implementing the General Code of Decentralized Local Authorities. It also announces the revision of the law governing the civil status and the law on local taxation.