No, this picture was not taken during the burial of one of the schoolchildren killed in Kumba 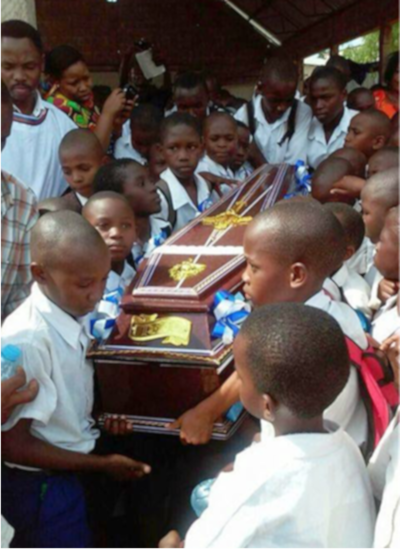 The picture above was recently posted on Twitter and the poster claimed that it was taken during the burial of one of the schoolchildren killed during the Kumba school massacre on October 24, 2020.

"It is very shocking to see children carrying the coffin of one of their comrades! Enough is enough! It can’t be tolerated,” the person wrote by particularly calling the attention of the President of Cameroon, Paul Biya.

The picture tweeted on October 28, 2020, was shared by hundreds of users but, the fact is the picture was not taken during the supposed burial as some of the comments even mention. Some of them indicate that the picture was taken in Togo while others claim that the scene took place in Tanzania.

With a reverse image search, we discovered that the picture was used in publications dating back to 2014 in Tanzania. Those articles recount the story of a seven-year-old student from Dar es Salaam elementary school killed and mutilated after being raped.

It resurfaced in 2017 in Togo on illustrating a poem published in homage to Yacoubou Abdoulaye, a child shot dead in Mango, in the north of the country, during a demonstration against President Faure Gnassingbé. At the time, the information was relayed by numerous European media.

Also, the picture is likely not recent because all of the schoolchildren pictured are not wearing masks as it should be if it was recent. Indeed, because of the coronavirus pandemic, countries have issued safety measures that include wearing face masks in public places.

We were unable to pinpoint the source of the original picture but we can confidently state that it was not taken during the burial of one of the schoolchildren killed in Kumba as the post would have it. Meanwhile, the burial of those poor victims is scheduled to start today November 5, 2020.