No, this picture of a tilting building was not taken in Cameroon 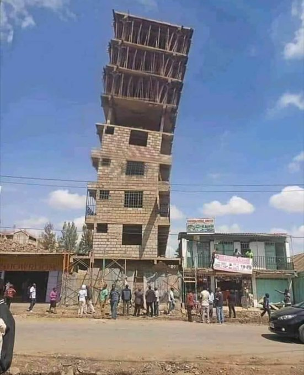 A Facebook post shared hundreds of times since it was posted on May 4, 2021, shows a multi storey building under construction. The peculiarity of the building is that it appears to be tilting to one side. The Facebook post claims that the picture was taken in Cameroon.

"How can you say that you've seen everything in this world when you've never been to Cameroon to see the unbelievable?" the caption above the picture reads.

The picture was not taken in Cameroon however. In fact, with a reverse Google Image search, we found it on several other social media platforms, including Pinterest.

The picture was taken in 2020, in Kenya and the Kenyan National Construction Authority even made a post about it.

"In Reference to the image making the rounds on social media of a building that appears to be tilting, and allegedly located in Kiambu, members of the public are advised that this is an edited image of a previously existing building that was demolished in 2018 in Umoja,” the tweeted on March 12, 2020.