No, ENEO is not the author of the message warning against stacking foods in freezers because of a possible power outage

A message bearing the logo of Eneo, Cameroon’s electricity utility company, has recently been circulating on social media warning users about the risk of their foods rotting in freezers due to power outages.

From its tone, it seems to be mainly addressing people who have built up large stocks of food, following the announcement of the coronavirus preventive measures adopted, on March 17, by the government.

"Eneo, as part of its new communication policy, wishes to inform its kind clients that it cannot be held responsible for the foods they are keeping in their refrigerators. Thank you, cordially," the message read in French.

Moreover, the beginning of the message looks professional but the end is clouded by errors. For instance, in the French version, the author of the message used colloquial language, which is inappropriate for serious corporate communication.

The message is a farce. Eneo has a bad reputation among users, who regularly complain about power cuts and rationing, and is often mocked on social media. 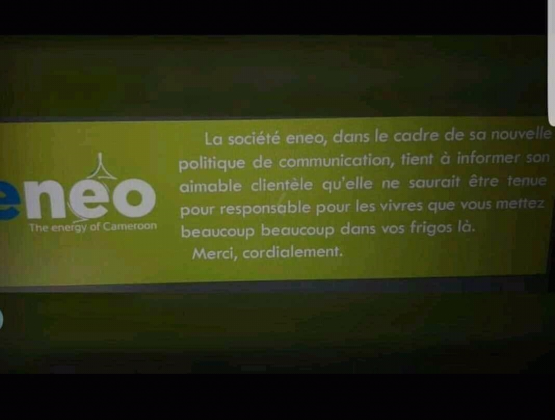