Beware, the civil cabinet published no recruitment ad this month of January 2021 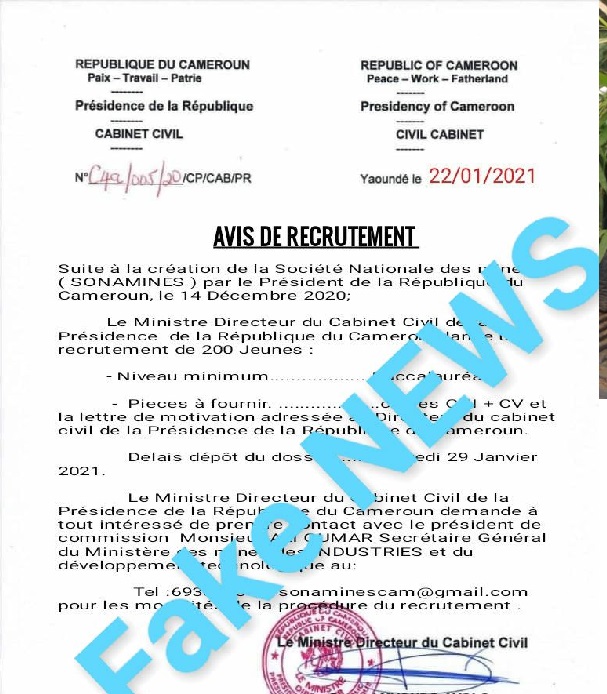 A statement attributed to Samuel Mvondo Ayolo, director of the Civil Cabinet of the Presidency of the Republic,  is being shared on social media since Monday, January 25, 2021. It announces the recruitment of 200 young people for the National Mining Corporation (SONAMINES), a corporation established by a presidential decree on December 14, 2020. According to the document, the recruitment is open to all the candidates holding at least A levels or baccalauréat degrees who can apply by January 29, 2021, by submitting their ID cards, CV, and cover letters.

The document also asks any interested person to "contact the chairman of the commission, Ali Oumar, Secretary-General of the Ministry of Mines, Industries and Technological Development" by dialing the following telephone number: 693327346 or by sending a mail to Cette adresse e-mail est protégée contre les robots spammeurs. Vous devez activer le JavaScript pour la visualiser.; to be informed about the procedures.

When applicants call the said telephone number, the person on the other end of the line asks them to send XAF25,000  via Orange Money for the submission to be processed. In any case, this is not the recruitment procedure of public administrations and companies. It, therefore, hints that the announcement is fake. Also, there are other clues like the date, the stamp, and signature (which have been scanned and posted on the document) showing that the document is fake.

Shared dozens of times on Facebook, this "press release" is presented by some Internet users as a "fake." Others, on the other hand, believe it is legit.

It is indeed a fake, according to the Ministry of Mines, Industry and Technological Development (Minmidt). In a press release published on January 25, 2021, Minister Gabriel Dodo Ndoké warned the public against the fake recruitment. "This is simply a scam scheme," the official said asking the population to be cautious.