No, Grégoire Owona is not under intensive care

At the opening of the parliamentary session of March, Cameroon’s Minister of Labor Grégoire Owona took pictures with people suspected, in the public opinion, to have been in contact with the coronavirus. Due to that fact, some people claim he has been infected. Worse, others claim he has been quarantined and is under intensive care in a hospital in Yaoundé, on the verge of death.

After investigations, these allegations seem unfounded. Grégoire Owona is not in intensive care. In a press release published on March 27, the official's Secretary-General and close collaborator Razack Johny formally denied them.

"Minister Gregoire Owona is not in intensive care. He has not even been tested positive for the coronavirus but he has been on voluntary 14-day confinement since last Monday [23 March]," Razack Johny wrote. He added that Mr. Owona is working from his home using the modern means that the ministry has put in place to ensure that the public service does not stop.

The day after the press release, the minister posted on Twitter to respond to opposition member Maurice Kamto. The day before, the president of the MRC had scolded the head of state about the management of the coronavirus pandemic in Cameroon. "Had I not confined myself to protect my compatriots, I would have come to meet you after reading your communiqué," the official reacted in a long post.

On March 30, we visited the minister’s office and the visitors’ waiting room was empty. One of the officials confirmed that Gregoire Owona was last seen at his place of duty more than a week ago. This is consistent with the date Razack Johny gave as the day the official stated his confinement.

Also, the minister answers his phone personally. This fact alone shows that he is not under intensive care or on the verge of death. 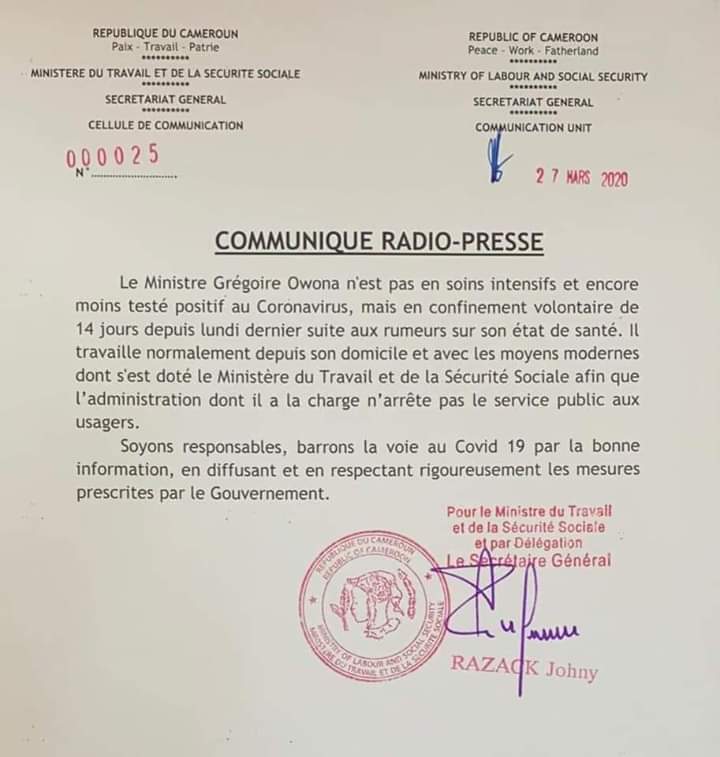