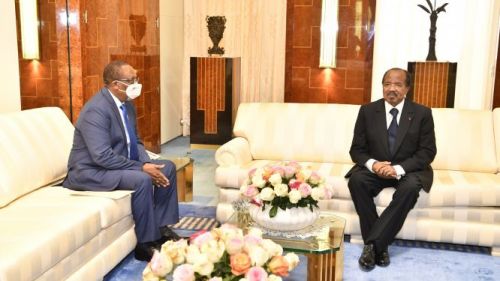 The President of the Republic of Cameroon, Paul BIYA, received yesterday Ambassador Joseph Keshi, special envoy of the Nigerian President, Muhammadu Buhari. At the end of this meeting which lasted about fifteen minutes, the Nigerian envoy said he came to solicit for Cameroon’s support in the African Union Commission elections scheduled for 6th of February 2021.

For the post of Commissioner for Peace and Security of the African Union, Nigeria is in competition with Burundi and Algeria.  For 16 years, only two Algerians held this position. The first is current Algerian Minister of Foreign Affairs, diplomat Ramtane Lamamra, who passed the baton in 2013 to his compatriot Ismaël Chergui, the current holder of the position.

The Commissioner for Peace and Security of the African Union is one of the most strategic positions in the organization as he heads the Union's Peace and Security Department, which is responsible for promoting peace, security and stability in Africa.

This department provides the secretariat of the Peace and Security Council (PSC) and deals with defense and security issues, peacekeeping and peace support operations, and conflict prevention. The Department also oversees AU field missions and liaison offices, such as the African Union Mission in Somalia (AMISOM), the African-led International Mission in Support of the Central African Republic (MISCA), and the African Union Mission for Mali and the Sahel (MISAHEL).