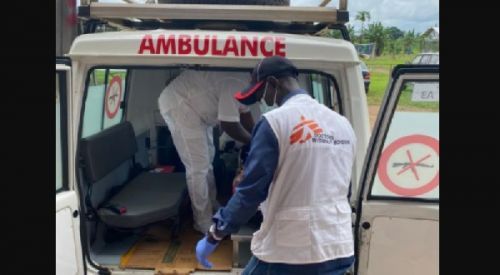 Anglophone crisis: MSF condemn the attack on its ambulance in Kumba

On the morning of February 4, 2021, armed men opened fire on a Médecins Sans Frontières (MSF) ambulance in Southwest Cameroon. The incident occurred near Mbalangi, along the road that links Kumba to Buea, the capital of the Southwest region.

"The ambulance was hit and the nurse accompanying it was injured. Médecins Sans Frontières condemns this attack against our colleague and a clearly identified ambulance. Health care facilities, including ambulances, are not targets," said Antoinette Buinda, communication manager for MSF in the Southwest.

The act was committed by unidentified individuals, however, several speculate that the attack was carried out by one of the secessionist armed groups that scour the region.

For about 4 years now, defense and security forces have been fighting the separatist armed groups that terrorize residents in the Northwest and Southwest. According to the UN Office for the Coordination of Humanitarian Affairs (OCHA), health services and infrastructures were seriously damaged due to the violent acts perpetrated.

To improve access to care and meet the growing needs of the population, MSF teams are supporting approximately 30 hospitals and health centers in Bamenda, Widikum, Kumba, and Mamfe. They also operate a 24-hour ambulance service that carried out more than 9,000 transfers in 2019.