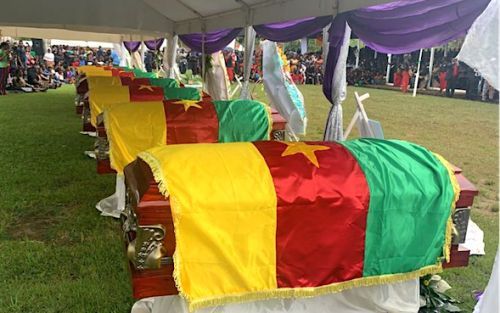 Cameroon’s Prime Minister was yesterday in Kumba in the Southwest region, for the celebration of the official funeral of schoolchildren murdered by a group of armed men on October 24.

Joseph Dion Ngute also conveyed to the bereaved families, messages of condolence and comfort from the President of the Republic Paul Biya.

"The President of the Republic, himself a father and grandfather, was very touched by this odious act that took place in Kumba. He, therefore, asked me to come with the authorities of the south-western region, accompanied by several members of the government, to console the parents of the children who were very coldly murdered, and also to send a message to the city of Kumba, and therefore to all the people of the south-western and north-western regions, that he will do everything possible to put an end to these atrocities," the Prime Minister said.

A total of 7 students were killed in the attack and 14 others were injured, many of them seriously. Dion Ngute also visited them.

So far, only one of the alleged assailants has been identified and died during an attempt by the armed forces to arrest him, according to official reports. The others are still on the loose. The President of the Republic has requested that all efforts be made to bring them to justice. Since this violent attack, several other crimes, attributed to armed separatist groups, were committed in various localities in these regions.