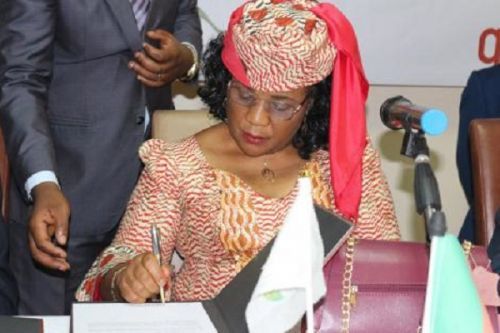 Lazare Atou, the general director of consulting firm Atou is “prohibited from signing or taking any action relating to the management of the residual assets of  ex-ONCPB, ONPC, and Regifercam till further notice.” This order was made known in a release signed by the Minister Delegate at the Presidency in charge of Supreme State Audit (Consupe), Mbah Acha Rose Fomundam (photo), and published on November 5.

According to the November 5 release, the precautionary measure was issued after a supreme state audit mission carried out an audit on the management of those former state companies’ residual assets. The audit mission “noticed some potential irregularities likely to deal irreversible blows to public authority,” the Consupe wrote.

In another release published on November 5, the Consupe indicated that from November 10 to 24, tenants who occupied the assets concerned and Atou’s co-contractors in the management of those assets over the 2006-2021 period will be heard.  For the official, the hearings are aimed at getting an overview of the consulting firm’s management practices.

In July 2019, Lazare Atou had opposed an audit mission from the supreme state audit. At the time, he explained that from 2012 to 2017, a similar mission had audited his firm’s management of the assets over the 2006-2012 period.  He claimed that the report sent by the audit mission to the special criminal court was full of spurious mismanagement accusations.

For Lazare Atou, only the interministerial task force - created on February 14, 2017, by the Prime Minister to review the management and suggest measures for the completion of the liquidation procedure - is legal and credible to gather information on the companies’ assets.

So, it is highly unlikely that the man who has been opposing government officials for years now will surrender to the Consupe decision.

Lazare Atou even assures that the report the Prime Minister transmitted to the President of the Republic on December 3, 2020 (after the 2017 mission), highlighted several misbehaviors by the Ministry of Land Affairs and the Port Authority of Douala. No accusation was waged against the consulting firm, he reminds.  Instead, “the report verified by both parties praised the increase, from XAF65 billion in 2006 to XAF285 billion in 2020, in the estimated value of those state assets thanks to researches conducted by the consulting firm Atou,” he claims.

It should be noted that in a correspondence dated July 2, 2021, following instructions from the President of the Republic, the secretary-general of the Prime Minister’s office had ordered a detailed audit from an independent firm.