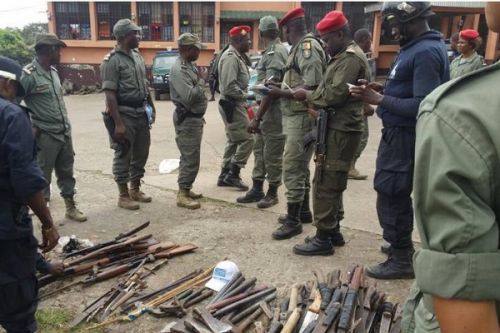 Insecurity: Parliament expresses concern over the sheer number of firearms in circulation in Cameroon

Today June 9, at the opening of the June session of the national assembly, Cavaye Yéguié Djibril, president of this institution reveals that close to 7,000 illegal weapons were in circulation in Cameroon at a time marked by rising insecurity, violence, and organized crime.

“We must tackle the issue,” the President of the national assembly commented adding that it is a threat to the physical integrity of residents and to state security.  He also praised the measures already issued by the government, through the Ministry of territorial administration to address the problem.

Indeed, weeks earlier, on May 6, the Minister of Territorial administration met with arms dealers to inform them that the sales of firearms were henceforth prohibited in Cameroon. At the time, he indicated that some 6,000 to 7,000 firearms were owned by unauthorized ppeople, while only 700 arms licenses were delivered within three years against the 18,000 requests submitted during the period. The official also said that given the security context and the abusive use of those firearms by shady individuals, the proliferation and circulation of firearms was a real threat to public order.

For the president of the national assembly, authorities must take additional actions to regulate the circulation of firearms in the country.

In 2016, the national assembly had adopted a law on the manufacturing, introduction, possession, and circulation of firearms in Cameroon. That law tightened the conditions under which individuals can own firearms in the country.