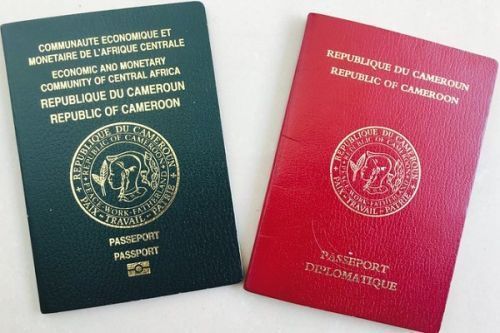 On June 8, 2021, after the recent budget amendment signed by President Paul Biya, increasing passport application fees from XAF75,000 to XAF110,000, Dominique Baya (secretary-general of the General Delegation for National Security-GDNS) held a press conference to reveal the innovations in the issuance of that travel document.

According to the secretary-general, measures have been taken to modernize and secure the new passports as well as the whole issuance chain. For instance, the passport can be requested online, application fees paid via mobile money or credit card, and an appointment set online.

When the date of the appointment is due, the requester just has to visit a center chosen during the online application process with the master copies of the requested documentation. Once the documentation is validated, the requester’s picture, fingerprint, and signature will be collected and the passport printed and handed to the latter.

“The approved applications will be processed and the passport printed within 48 hours after the appointment. If the application is rejected, a mail and an SMS will be sent to the number and mail submitted by the requester during the application. The mail and SMS will state the motive for rejection and the next steps to be taken by the said requester,” the general secretary said.

The end of “express” passports

The new passport has been presented as more secure because of the online pre-enrolment procedure combined with online payment systems, laser engraved images, the new design, and the various security elements embedded in compliance with international standards. Also, the new requesting platform can be connected to other public IT platforms.

According to Dominique Baya, the aim of this change is to end the waiting lines usually observed in front of the various offices under the directorate general of emigration and immigration. It is also aimed at ending the requirement for all the requesters to travel to Yaoundé to accelerate their passport issuance process.

“There no more be a rush towards the so-called express passports, which have never existed by the way,” he said. The new issuance process will be operation on July 1, 2021. That same day, the new application fee will become effective.

Let’s note that the current application fees in Cameroon are thrice higher than the fees applied in countries like Togo and Côte d’Ivoire (between CFAF30 to 40 thousand).