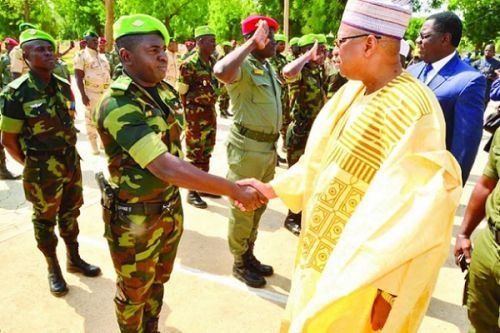 For his mediation mission to appease the Arabes Choas and Mousgoums/Massa, two communities violently clashing since last December 4, Midjiyawa Bakari, governor of the Far North invited traditional rulers of that region to join him in his tour.

Through a telegraph, the administrative authority invited the president of the Economic and Social Council (Luc Ayang), the Minister of Economy (Alamine Ousmane Mey) and the Minister of Public Works (Ibrahim Talba Malla) and various authorities to take the necessary measures to join him in the missions scheduled to start today December 10.

The traditional rulers invited notably include the Lamidos of Maroua, Mokolo, and Yagoua who are not directly concerned by the intercommunity conflict that has already claimed dozens of lives and the displacement of close to 50,000 residents (30,000 of them fled to Chad) and caused important material damages.

The governor's initiative undertaken to resolve the conflict is not unanimously supported, however. Far from that, there are strong criticisms. "This conflict is beyond the governor's jurisdiction. We saw what happened last time: superficial solutions yield superficial results. The most important thing is to develop the regions, boost the population’s access to drinking water, build tracks for transhumance, and build schools, hospitals and markets," a native of the Far North commented on the internet.

For another resident, the initiative is splendid but, since the conflict involves breeders, the Ministers of Livestock and Agriculture should have been included to find an urgent, appropriate and lasting solution for peace to reign.

An observer well aware of local realities points that the root of the problem between the two communities is so deep that the governor’s visit will not be enough. It will only be a parade to calm the belligerents for just some days.

He also reminded that the governor’s visit on December 5 was not enough to end the conflict. Far from that, he claimed, the fights started with renewed intensity extending to additional localities.