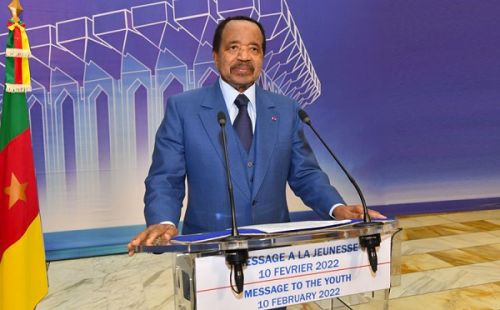 “(...) The main obstacle in this regard has always been accessing the most common funding for small and medium-sized enterprises.”  This excerpt is from President Paul Biya’s address in the framework of the 56th edition of Youth Day.

To address this obstacle, the President of the Republic announced a set of measures.

“ (...) In the short term, the Government plans to mobilize specific national, bilateral, and multilateral funding to support the establishment of a guarantee fund for young entrepreneurs.

The said Fund would provide project initiators and start-ups with the requisite guarantee to raise capital from financial markets or obtain financing from traditional banks,” he promised.

The president also praised the financial resources provided by the government for state programs set up to encourage youth entrepreneurship. "I am pleased to note that in 2021, all these programs and projects were financed to the tune of 190 billion CFA francs," said Paul Biya.

He also intends to raise even more resources by involving Cameroon's development partners in what amounts to a Marshall Plan for youth entrepreneurship. He presented the importance of the plans but he did not put forward a specific figure for the resources to be provided.

“Definitely, small and medium-sized enterprises, notably youth entrepreneurship, can and should serve as key drivers of our country’s economic and social transformation,” he added.

Going further, Paul Biya explained that the development of SMEs will create many additional jobs.  He also announced the creation of a National Employment Council, which is called to provide new solutions to reverse the unemployment curve and improve business productivity.

The president further praised young Cameroonians’ interest in digital technology with the creation of startups in various sectors.  I "Urge them to be more inventive and creative in the digital economy sector, which has bright prospects for the future," the president concluded.