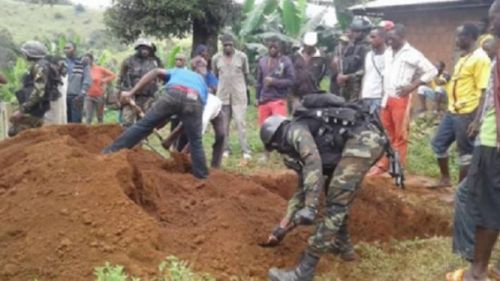 The investigation into the Ngarbuh massacre that took place in northwestern Cameroon on 14 February 2020 resulted in the arrest of three soldiers and 19 civilians.

According to lawyers for the civil parties (the victims), a former separatist fighter and 17 members of a self-defense group have also been charged. “They are accused of committing offenses of violation of instructions, group assassination, arson, and group destruction of property,” said Tamfu Richard.

In a statement issued on 21 April, the Secretary-General of the Presidency of the Republic (SGPR), presenting the conclusions of the report, admitted that three soldiers “participated in an operation that caused the death of several people and the burning of houses. In addition to the five terrorists killed, the investigators also found that “three women and ten children died” in this operation.

The Head of State also ordered that the victims be exhumed, to receive a dignified funeral at the expense of the State of Cameroon. He also instructed that all the beneficiaries of the deceased should be identified to pay the appropriate compensation and reparations.