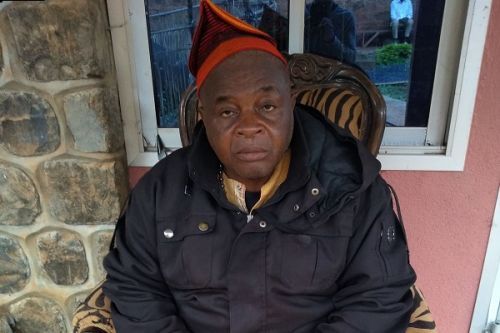 Nso: His majesty Sehm Mbinglo II released by separatists but ordered not to contest in the coming regional elections

His Majesty Sehm Mbinglo II, Fon (traditional ruler) of the Nso, in Kumbo district (Meme department, Southwest region) was freed yesterday, November 10, 2020. The ruler was released after six days of captivity in the hands of the Anglophone separatists.

Before freeing him, his captors dictated a set of conditions he should abide by. This includes withdrawing his candidacy for the coming regional elections. He was also asked “to plead with the President of the Republic for the release of secessionist leaders incarcerated in the central prison of Yaounde-Kondengui, including Sissiku Ayuk Tabe and his relatives," according to an audiotape attributed to the "Bui Warriors" (a separatist militia, a branch of Independence Army called "Ngoketunjia Restoration forces”).

After his release, the traditional ruler was taken to Bamenda and not to Kumbo where his throne is. He will therefore be able to return to Kumbo only after he has abided by all the conditions set by the separatists.

The Fon was kidnapped on November 5 (at about 5:00 p.m.) with Cardinal Christian Tumi. At the time, they were in a convoy coming from Bamenda and bound for Kumbo when they were intercepted by an armed band at Baba 1 (Babessi district, not far from Ndop, the chief town of Ngo-Ketunjia department).

The following day, Cardinal Christian Tumi was found and freed at about 11 am "thanks to the combined actions of the traditional authorities, Catholic followers of Kumbo and its surroundings, and the Defense and Security Forces,” a statement by Minister of Communications  René Emmanuel Sadi informs. According to the statement, the Cardinal was found in Ntchekong par Babessi, “very far from the place where he was abducted.”

Let’s note that since the announcement of the coming regional elections, traditional chiefs of the North-West and South-West regions have been subjected to various attacks by separatist groups. On November 6, Molinga Francis Nangoh (head of the village Liwuh la-Malale par Buea in the Southwest region) was murdered by suspected separatists right inside his house. Those acts are meant to intimidate the rulers and prevent them from participating in the elections.

For Cameroonian authorities, the said election is crucial for the peaceful resolution of the Anglophone crisis. The establishment of the regional councils expected after these elections will complete the implementation of the "Special Statute" which is supposed to grant more autonomy to the English-speaking regions of the Northwest and Southwest.