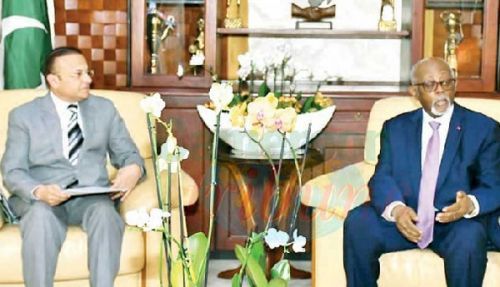 The Cameroonian Minister of External Relations (Minrex) granted an audience last October 11 to the High Commissioner of Pakistan to Cameroon with residence in Abuja, Nigeria. The two officials agreed to boost diplomatic relations between their countries through the opening of embassies, meaning  Yaoundé will have a diplomatic representation in Islamabad and vice versa.

“We discussed issues related to visas and the Cameroonian minister said his country will soon launch an e-visa system to ease the process,” High Commissioner Muhammad Tayyab Azam said. The opening of embassies is expected to come with increased trade between Pakistan and Cameroon. The African nation imports many food products from Pakistan, including rice, alcohol, sugar, and sweets, but also textiles and plastics.

In recent years, the country has worked to improve its relations with the Eastern world.  In 2019, India announced the opening of a diplomatic mission in Yaoundé. Ties have also been strengthened with the Gulf countries, mainly the United Arab Emirates and Qatar.