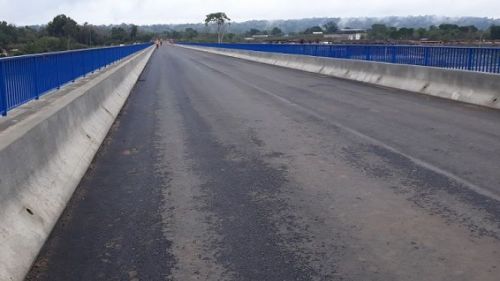 The Sanaga bridge linking Yaoundé to Ngaoundéré enters into service

The Ministry of Public Works (Mintp) informs that the work on the Batchenga-Ntui road has evolved significantly. “We note good progress with a completion rate of 89% with the bridge, and its access roads completed. A remarkable evolution considering this rate was 75.33% last January,” the Mintp reported at the beginning of April.

The department adds that one of the measures to fight against the spread of Covid-19 was the opening of the bridge to traffic since April 6, to avoid the congestion of travelers in ferries

The bridge over the Sanaga allows a rapprochement between the northern and southern regions of the country, especially between Yaoundé and Ngaoundéré. The final commissioning of this infrastructure, valued at CFA12.36 billion, will make it possible to take a much more direct route (Yaoundé-Batchenge-Ntui-Yoko-Tibati-Ngaoundéré), 664.5 km long. This makes a distance reduction of 178.5 km.