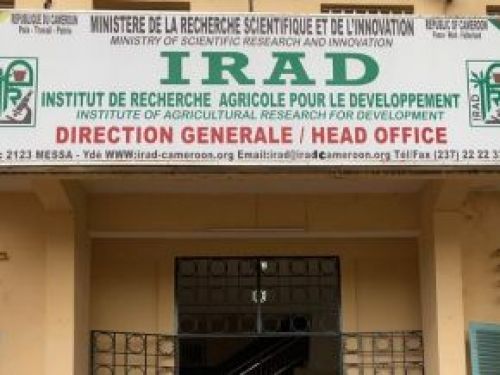 On June 23, 2020, the General Director of the Institute of Agricultural Research for Development (IRAD), Noé Woin, suspended the employment contracts of three staff representatives, pending "the decision of the competent authorities to definitively dismiss them."

The reasons given for this decision are namely blatant insubordination, repeated disrespect, threats, and assault on managers to dismiss them, inciting staff to disobey and wilful disruption of employees’ works.

In the correspondence addressed to the staff representatives concerned, the director states that the suspension of these employment contracts was decided by the Disciplinary Board, which qualified the grounds as gross misconduct and gave a favourable opinion for dismissal.

The same day, Noé Woin terminated, without prejudice to legal proceedings, the employment contract of nearly thirty agents for forgery and use of falsified or forged diplomas.

In a correspondence addressed on June 26, to the Minister of Labour and Social Security (Mintss) - Grégoire Owona, the Union of Free Trade Unions of Cameroon (CSAC) presented a completely different version of the reasons for the staff dismissal. In the correspondence, the union requested the intervention of the Mintss because staff representatives are tormented, assigned illegal tasks, their salaries arbitrarily suspended, and illegally dismissed.

The CSAC reminds Grégoire Owona that the dismissal of staff representatives is the result of a dispute that dates back to 2011, before the appointment of the current general director. The dispute ensued "from the multiple violations by the IRAD of the regulatory legal provisions of the legal framework governing the missions and functions of staff representatives," says Jean Marie Ndi, President of the CSAC.

Despite the many consultations, Jean Marie Ndi continued, IRAD did not respond favourably to the demands of the staff representatives. "Tired of waiting for the outcome of some of their demands, workers sent strike notices to IRAD through the CSAC to put pressure on the management. This strike notice was supposed to be effective from February 18, 2020,” the President of the CSAC explained.

This strike notice prompted a tripartite meeting on March 6. And an evaluation meeting was scheduled for July 15. But in the absence of tangible action and to stop the workers' action, Noé Woin brought all the staff representatives before the disciplinary board without asking for prior explanations. Then, the salaries and employment contracts of some of the representatives were thus suspended.

The CSAC denounces the absence of "any concrete action by the labour administration calling on this employer to comply with the regulations in force regarding the suspension of salaries, transfer or assignment of the staff representatives." It also indicates that it did not intend to stop just with that correspondence.