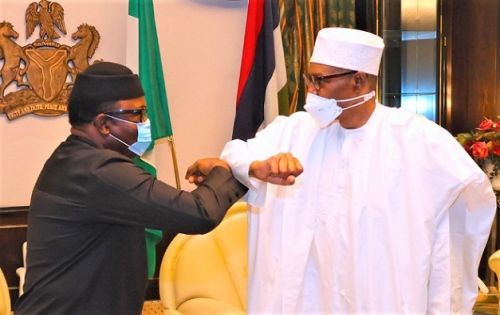 During an audience granted on July 13, 2021, to Felix Mbayu, special envoy of Cameroonian President Paul Biya, Nigerian President Muhammadu Buhari said that his government no longer intends to remain a mere spectator of the socio-political crisis in the Anglophone regions of Cameroon.

According to the Daily Post, citing a statement signed by the Nigerian presidential spokesman, it is in Nigeria's interest “to ensure that Cameroon is stable.”

“We will be steadfast in our support to you,” the President of Nigeria said, according to the spokesman. During the audience, it was also revealed that Nigeria has been “acutely aware of separatist agitation by the Ambazonian movement” since 2016 because the crisis would also impact Nigeria.

The Daily Post also notes that Nigeria's support for its neighbor is fueled by experiences, including Cameroon's refusal to serve as a rear base for Nigerian independence fighters during the Biafran war in the late 1960s. For Nigerian authorities, this is the time to pay Cameroon.

According to the Nigerian media, Felix Mbayu expressed President Paul Biya's satisfaction with the role played by this neighboring and brotherly country not only in Africa but also in the Anglophone crisis. For example, it is thanks to the collaboration of the Nigerian authorities that the pro-independence leader Sissiku Ayuk Tabe was apprehended on Nigerian soil and has since been held in the Yaoundé central prison.

This collaboration is necessary since Cameroon and Nigeria share deep historical ties, a long land border of more than 2,000 km, and, by extension, common security challenges. According to Felix Mbayu, the two countries must join hands to find common solutions to these challenges.