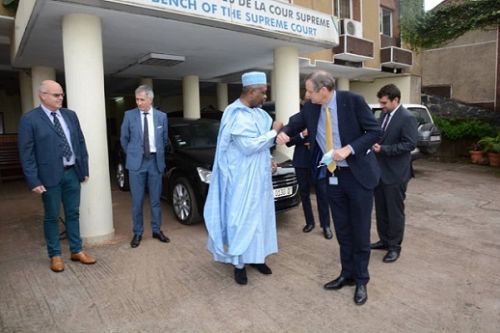 On a working visit to the audit chamber of Cameroon, Philippe Van Damme, The European Union’s ambassador to the country once again requested the publication of the report detailing the management of the XAF180 billion coronavirus response fund.

"Friendly work meeting with the audit chamber on the enhancement of its independence and the urgent publication of the Covid-19 fund’s audit report, " the ambassador wrote in a tweet.

This is not the first time the EU ambassador is publicly requesting the publication of this report, which was to be presented to MPs during the June 2021 session. On August 5, during the 9th meeting of the dialogue platform on public finances held in Yaoundé, Ambassador Van Damme recalled the importance of transparency in the management of public finances and insisted on the need to publish the said report.

"The quick publication of the audit report on the use of Covid funds and the organization of a parliamentary debate to draw the necessary administrative and judicial conclusions would confirm the government’s commitment to transparency and accountability in the management of public funds. It will also reassure citizens that the government is respecting the commitments it made in its April 28, 2020 letter of intent to the International Monetary Fund," he said.

Last May when an excerpt of the draft report was leaked, the Minister of Finance announced that the document would be officially presented during the June session. It was not presented and no official explanation was provided. At the end of the June 2021 session, another excerpt of the report leaked on social media.

The European Union usually insists on transparency in the management of public finances, by stressing the need for the independence of the audit chamber.

"For the credibility of the government, and the independence of the audit chamber, sufficient financial resources should be allocated to that chamber through a specific budget line, which would be different from that of the Supreme Court," the EU ambassador previously suggested. This is a formal call for authorities to comply with the CEMAC law of December 2011 governing finance laws and public accounting.

For the time being, the chamber’s report on the management of covid funds has not been published yet. Meanwhile, the leaks have raised mismanagement suspicions.