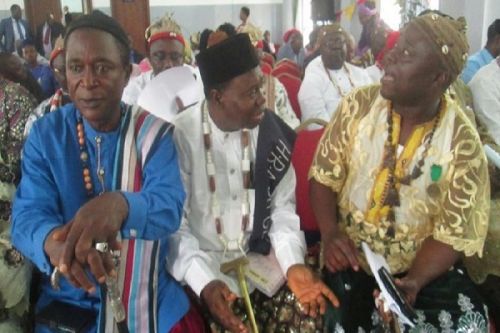 Yaoundé : Lebialem elite convene a public demonstration to condemn the assassinassion of traditional leaders by separatists

On February 16th, 2021, the esplanade of the National Museum in Yaoundé hosted a demonstration in support of the residents of Essoh-Atah (Lebialem department) where three traditional leaders were executed last Saturday by English-speaking separatists. This public demonstration initiated by the elites and nationals of this department of the South-West region was scheduled to start at 3 p.m., according to a statement signed by Paul Tasong, president of the Lebialem community in Yaoundé.

On the night of February 13th, 2021, Chief Fuaminkeng, Chief Fiance Aleh, Chief Fuajijong, and Chief Fuawehnsuo were captured at their respective homes in the Essoh-Atah locality by supporters of the armed wing of the secessionist movement called "Ambazonia". The operation was carried out by the 'Red Dragon' militia commanded by rebel leader Lekeaka Oliver, alias 'Marshal'.

"They targeted the traditional chiefs, woke them from sleep, took them to the market square around midnight, shot three of them, and threw their lifeless bodies into a nearby river," said Minister Paul Tasong.

According to an administrative source, the murdered traditional chiefs "refused to hand over the proceeds of cocoa sales for the 2020-2021 season and encouraged the villagers not to succumb to the gangs’ pressure. The separatists also disliked the fact that these chiefs organized the reopening of schools in the village."

"Lebialem's pacifists, who constitute the moderate silent majority, are advised to remain extremely vigilant and to strengthen cooperation and collaboration with defense and security forces to help them unroot the bad guys who are holding part of the community hostage," Paul Tasong said.

Men suspected to have been part of the crime were reportedly arrested by elements of the Rapid Intervention Battalion (RIB). But this information has not yet been confirmed by Cameroonian officials.

In an attempt to create a chimeric state known as 'Ambazonia' (made up of the English-speaking regions of the Northwest and Southwest) separatist militias have been racketeering, pillaging, raping, and murdering the populations of this part of Cameroon since 2016. The fights between these rebel groups and Republican security and defense forces resulted in the death of 3,500 people and displaced over 700,000 residents, according to a report on February 4th by the UN Office for the Coordination of Humanitarian Affairs.