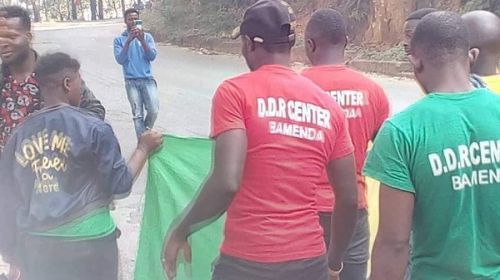 Anglophone crisis: after Buea, residents of the Bamenda DDR camp take to the streets

In Cameroon, the former Anglophone separatist fighters welcomed at the Northwest Disarmament, Demobilization and Reintegration (DDR) Center marched through the streets of Bamenda yesterday, Monday, February 15th, 2021. They wanted to draw the attention of the authorities to the government's broken promises to them.

They protested from the DDR site to the office of the governor of the North-West region. "Amba must obey the government...if you want to kill me, go ahead. But I will never flee this country," they chanted.

In an exchange with Governor Adolphe Lele Lafrique, these residents of the DDR center in Bamenda expressed concern about their "future" and their treatment at the demobilization center.

"We want the government to set a clear timetable for those who have been disarmed. We need to know how long we have to stay in the DDR center before we can be reintegrated into society. Some of us have been here too long," they said.

Also, the demonstrators demanded the improvement of their living conditions. This, according to them, would involve the payment of an allowance that would allow them to meet some of their daily needs. The demobilized militiamen also requested that identity cards be issued to them, highlighting their status as repentant combatants.

As a reminder, they blocked traffic on the road from Bokwango to Long Street in Buea on February 1st for similar reasons. Prime Minister, Joseph Dion Ngute, released CFA35 million to finance the reinsertion of 70 of the oldest ex-combatants of the Buea DDR. The Head of Government also instructed that national identity cards be issued for them. And while the PM's instruction has restored calm in Buea, on the Bamenda side several DDR residents feel discriminated against and demand that the government also look into their cases.

These demonstrations come at a time when the state has just invested about CFA2 billion to build and equip a new reception center for former separatists in Bamenda. The infrastructure with a capacity of 1,000 seats whose work is completed is a multidisciplinary center built on 30,000 m². As soon as it is inaugurated, it will offer a range of training courses to ex-combatants, focusing on information and communication technologies, automobile mechanics, masonry, carpentry, sewing, agro-pastoral trades, among others.

The National Committee for Disarmament, Demobilization, and Reintegration (CNDDR) faces a major challenge in the remobilization of young combatants who are still in with rebels.

To date, at least seven armed militias with between 2,000 and 4,000 combatants operate in the Anglophone regions of the country, according to the International Crisis Group. The risk is that these recurring recriminations by DDR residents will discourage the young people still enlisted who wish to lay down their arms.