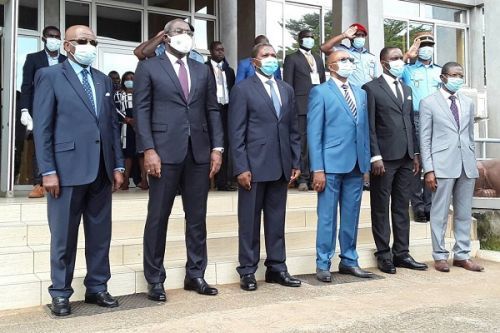 Minat, DGSN, and Sed take measures for a peaceful end of year

The second biannual Governors' Conference, which opened on November 16, 2020, is focused on the socio-political and security situation in the 10 regions of Cameroon, with a special emphasis on the North-West and South-West, where a separatist crisis is ongoing since 2016.

During the conference, the Minister of Territorial administration (Minat) Paul Atanga Nji indicated that the situation was under control in those regions but residents’ mental health is still affected by some abuses, even though there is a reduction in the separatist gangs’ capacity to cause havoc. He also urged the governors to ensure the end of year celebrations as well as the regional election of December 6, 2020, are organized peacefully with the security of residents in mind.

During the conference, Martin Mbarga Nguélé (Delegate General for National Security-DGSN), and Galax Etoga (the Secretary of State to the Minister of Defense in charge of the National Gendarmerie-SED) presented the measures already taken to ensure the security of the regional elections and the end of year celebrations.

Adolphe Lele Lafrique, governor of the Northwest, also announced special measures to avoid any disruption before, during, and after the electoral process. "The President of the Republic has given strict instructions to the administrative authorities and the security forces so that, despite the difficulties, the regional elections will be held in a serene atmosphere in the region," said Adolphe Lele Lafrique.