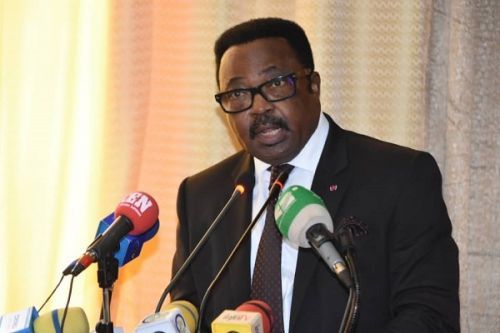 Yesterday March 7, 2022, the Minister Delegate to the Minister of External Relations (Minrex), Felix Mbayu (photo), signed a release presenting the measures taken by the government to assist Cameroonian nationals still in Ukraine or those who have already fled Russian offensives and found refuge in neighboring countries.

Those measures were instructed by the President of the Republic for “urgent and necessary” consular support and care to all the distressed compatriots,” Felix Mbayu explained.

"The Ministry of Finance has been instructed to immediately release funds to the Cameroonian embassy in Berlin, Germany, that has easy access to Ukrainian borders. Those funds are dedicated to caring for distressed Cameroonians,” he informed without specifying the amount released.

According to the government official, "almost all" Cameroonian embassies in Europe have been mobilized to assist Cameroonian nationals. On February 26, the “territorially competent” embassy in Russia alerted main associations of Cameroonian nationals in Eastern Europe and organized a virtual meeting on the “security measures to be implemented.”

Also, because of the difficulties on the ground, notably with the hostile situation in the Eastern part of Ukraine, Cameroonian embassies in Germany, Belgium, France, and Italy have been mobilized for necessary assistance, we learn.

In addition, the Minrex has set up a monitoring unit to coordinate the actions and follow the day-to-day developments and the situation of Cameroonians still in Ukraine.

Crisis units were also set up at the embassies in Berlin and Moscow. They are reachable through the numbers +4915210621925 (mobile and WhatsApp) and +79262033360. Cameroonians still stranded in Ukraine are encouraged to reach out through one of those numbers.  "As of March 5, 2022, teams of Cameroonian diplomats have been dispatched to the borders Ukraine shares with Poland, Moldova, and Serbia. They are working in close collaboration with international organizations on the ground (IOM, ICRC, ICDO, UNHCR) as well as the presidents of Cameroonian associations who are mobilized for this purpose," said Felix Mbayu.

The International Civil Defence Organisation (ICDO) has, for instance, committed to assisting nationals of African and ICDO member countries who are finding it difficult to cross the Ukrainian borders. Its assistance includes transportation from Ukraine to Poland and from Poland to the origin country as well as care to the persons concerned.

This release comes amid information published by Western media stating that Cameroonian nationals in Ukraine have been “abandoned” by their country despite their calls for help.

For Felix Mbayu, the measures taken by the government demonstrate that unlike what “some malevolent media" claim, the Head of State “deployed all the necessary actions as he did in the past by having the State repatriate 2,665 Cameroonians stranded abroad in 2020 because of the Covid-19 pandemic or for the return of our compatriots who were distressed in other countries due to crises.”

Nevertheless, Cameroon has not announced a repatriation date yet. "The Ministry of External Relations, under the leadership of the Head of State, Head of Diplomacy, is mobilized to provide appropriate solutions to the situation of our compatriots in Ukraine," reads the release signed by Felix Mbayu.

Like Cameroon, many African countries are stepping up efforts to help their nationals out of Ukraine. On March 1, Ghana repatriated a group of students who managed to flee the war. Nigeria also repatriated some of its nationals from countries where they took refuge after fleeing Ukraine.