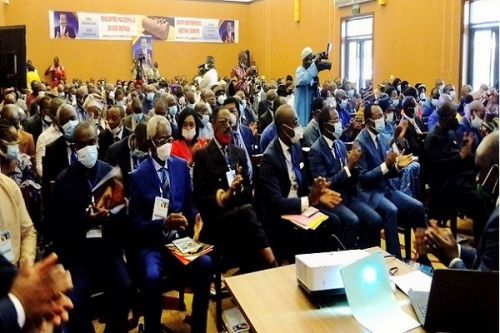 Close to 300 public figures were present in Ebolowa last October 16, for the first edition of "Rencontre fraternelle du Sud" (Refras), a fraternal meeting initiated by Jacques Fame Ndongo, a senior official of the ruling party and Minister of Higher Education for 17 years now.

In his inaugural speech, Jacques Fame Ndongo who was the moderator of the fraternal meeting presented “the progress achieved in the South during the “New deal” or Renouveau period and invited the population to consolidate those achievements,”  the communique published at the end of the meeting reads.

During the meeting, participants suggested the creation of a monitoring committee to follow up and monitor the implementation of the actions recommended during the meeting. That committee should be presided by the president of the Regional Council of the South Region. The committee is tasked to “elaborate a set of actions to be implemented in the short to medium term to enable the South to catch up with other regions in areas where it is lagging.”

The areas identified are notably infrastructure, water, electricity, roads, and IT. To facilitate the achievements of the goals set, it was recommended that the Refras be organized every year.

The President of the Republic’s continued solicitude towards the South

The elite present at the meeting acknowledged the constant solicitude of the President of the republic towards the South and they are right. Regularly, the regional triweekly L’œil du Sahel that is focused on the three northern regions has reported that the South is the region with the highest number of senior officials and state firms’ managers appointed.

In that context, it comes as no surprise that the Refras initiated by the sons and daughters of the Southern region for the development of their origin region is criticized. The main fact criticized by some people about the Refras is that some officials born in other regions were invited for the sole purpose of listing the progress achieved in the South during the New Deal era.

An example of such officials is Minister of Public Works (MINTP) Emmanuel Nganou Djoumessi who presented an overview of the road network in the region. “The South network currently has 10,705.71 kilometers of road. This includes 38.5 km of highway,  1,267.54 km of regional roads - 169.35 km of which are already paved, as well as 8,034.35 km of communal roads - 97.90 km of which are already paved.  Several major projects are underway while others are programmed and awaiting launch,” a communique from the MINTP informed.

The participation of non-natives is not the only criticisms waged against the Refras. Opposition party MRC created by Maurice Kamto “vigorously denounced the organization of such meeting, outside republican institutions.” For that purpose, the party issued a release on October 17, 2021, through its secretary-general Appollinaire Legrand Oko, against the meeting to which it was invited.

“Cameroon has regional institutions that constitute a formal discussion and decision-making framework to solve the problems faced by its citizens. The participation of several senior officials to that meeting, outside an institutional framework, is a dangerous message sent to the national opinion,” the party wrote.

The MRC also criticized the government accusing it of “authorizing and encouraging identitarian closure in the South while fighting such tendencies elsewhere.”

The party further referred to the "All Anglophone Conference", an initiative led by late Cardinal Christian Tumi. "His desire to successfully organize this conference for the two Southwest and Northwest regions rocked by a crisis was met by a non-negotiable rejection from the ruling regime till his death,” the release continued.

MRC explained that it refused to take part in the Refras because by authorizing the meeting, the government appeared to be applying double standards for the different regions in the country.

The political movement “Mouvement 10 millions de Nordistes”, which advocates for the interests of the three northern regions, joined the MRC to criticize the Refras.  “We also have the right to meet and discuss in strict compliance with Republican rules,” said Guibai Gatama, national coordinator of the movement.

The movement was forbidden to carry out its activities, through a decision issued on November 18, 2020, by Minister of Territorial Administration Paul Atanga Nji for its aggressive and illegal nature as well as its initiatives that go against democratic institutions by aiming to divide Cameroonians, calling them to insidiously go against one other. Moreover, the MINAT explained in his decision, the movement’s missions are against  " the peace, unity and national integration principles enshrined in the Constitution.”

Meanwhile, Guibai Gatama argues that his movement has never organized a protest march or even requested authorization to do so.

For several sources, Paul Atanga Nji issued the decisions under pressure. The said sources believe that the people who pressured the MINAT into issuing such a decision were just embarrassed since the movement was demonstrating that most public policies were not benefiting the northern regions.