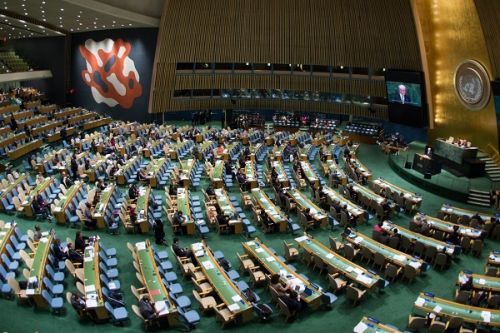 Diplomacy: Cameroon rallies its CEEAC peers on its candidacy for the presidency of the UN general assembly

Cameroon recently won the support of its peers for its candidacy for the presidency of the UN General Assembly in 2024, state media CRTV reveals. According to the media, the support was won on January 19, 2022, in Brazzaville (Congo), during the conference of the  Economic Community of Central African States (ECCAS).

Since the creation of the United Nations in 1945, Cameroon has never presided over the General Assembly. Meanwhile, a neighboring country like Nigeria has assumed the presidency of this international institution several times.

Cameroon still has until mid-2024 to convince other countries to give it their support because the president of the General Assembly, as well as its bureau, are elected  (for a one-year term) three months before the UN General Assembly, which is held in early September every year.

As stated by the UN, "the Assembly is empowered to make recommendations to States on international issues within its competence. It has also initiated actions -political, economic, humanitarian, social, and legal- which have benefited the lives of millions of people throughout the world,” like the landmark Millennium Declaration adopted in 2000.

If Cameroon is elected, it will have to appoint an official tasked to lead the works of the General Assembly during the 1-year mandate. The said works include the study of issues related to international peace and security, making recommendations to ensure their peace and security are preserved, studying and approving the UN budget as well as making a financial assessment of member states.