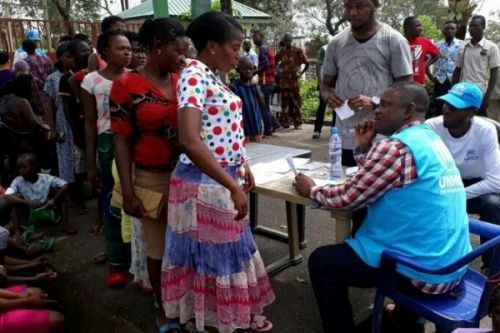 The National Commission on Human Rights summons assistance for Cameroon, which hosts 440,000 refugees

In a release published on June 20, 2021, on the sidelines of World Refugee Day, the National Human Rights Commission (CDHC) informs that Cameroon needs assistance for the management of refugees and internally displaced persons.

The CDHC reminds us that World Refugee Day was instituted to honor the 26 million refugees worldwide and celebrate the strength and courage of “those people who were forced to flee their origin countries to preserve themselves from conflicts or persecution.”

According to a communique issued a while back by the Canadian High Commissioner to Cameroon, Cameroon is managing the most-neglected internally displaced persons’ crisis. As a consequence of that crisis, 386,000 children (refugees, internally-displaced infants, and children in host communities alike) need education services, according to the CDHC.

Also, there is a lack of health institutions in refugee camps. For instance at the Minawao camp, since 2017, only two health centers are available for about 60,000 refugees. For the CDHC, this figure is below the High Commissioner for Refugees (HCR) norms, which is one health center for 20,000 refugees.

The CDHC nevertheless praises the actions initiated by the Cameroonian government to provide health and education services to refugees, asylum seekers, and internally displaced persons. Indeed, In the 2016-2017 school year, the country built 104 schools for the children of refugees, internally displaced persons, and host communities in the Far North.

The CDHC also recommends the Ministry of External Relations should operationalize the refugee eligibility committee to allow a recognized status and its privileges, in the health and education sector notably, for refugees.