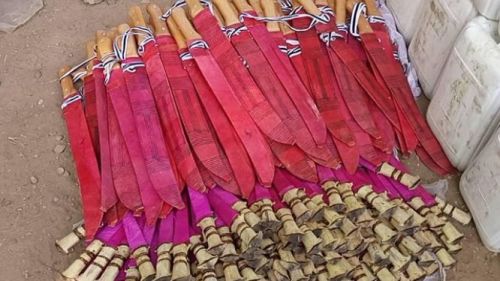 On December 20, 2021, Cameroon’s Customs announced the seizure of 10,000 knives and 5,000 machetes in Maroua, the regional capital of the Far North. According to a customs official, the shipment was headed for Kousseri, no doubt either for the Arabes Choas or the Mousgoums, the two communities in the Logone et Chari department that clashed a few days ago. The result of those clashes is 40 deaths (36 among the numerically superior Arabes Choas and 4 among the Mousgoums), significant material damage, and at least 50,000 displaced persons, according to a government source.

Despite the obvious peace that followed the visit of a government mission led by the Minister of Territorial Administration (Minat), Paul Atanga Nji, on December 14, 2021, at Kousseri, the two communities seem to still be out for war. "This could explain why Governor Midjiyawa Bakari, who arrived in Kousseri before the government mission, has not returned to Maroua since then," a local security source speculates.

According to a communique published by the Minister of Communication, the government mission prescribed by President Paul Biya was deployed to seek the root causes of this conflict and find lasting solutions. At the same time, Paul Biya urgently calls for peace, restraint, patriotism, and harmony, which are the cardinal values that must govern reactions among Cameroonians, the communique informs.

According to the same document, the President of the Republic "urges for an end to these fratricidal confrontations.

For a source at the Ministry of Territorial Administration, some elites’ speeches do not favor peace. "During the public meeting chaired by the Minat [the Minister of Territorial Administration] in Kousseri, an elite speaking on behalf of the Arabes Choas made it clear before the cheering crowd that his community’s anger would not subside until the 2,500 cows stolen by their neighbors are returned," a local journalist reported. The journalist voiced his concerns for the coming days because, according to a source within the territorial command, during the clashes, law enforcement agents were unresponsive. Also, the defense forces deployed to fight the terrorist sect Boko Haram refused to intervene, arguing that this intervention falls beyond their authorizations.