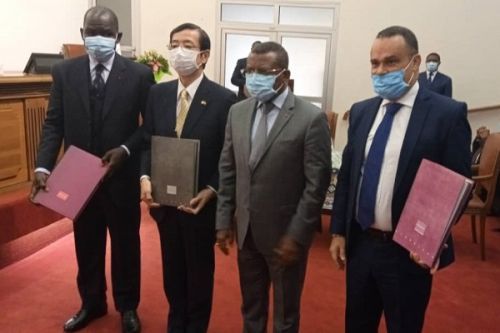 With this move, Japan became the first partner to materialize its support for the Presidential Plan for the Reconstruction and Development of the North-West and South-West Regions (PPRD-NW/SW), devastated by an armed crisis that has been going on for nearly five years.

The financing agreement was signed on February 18 between the parties involved in the implementation of this plan, including the Japanese Ambassador to Cameroon, Osawa Tsutomu, the Minister of Economy, Planning and Land Management, Alamine Ousmane Mey, and the Resident Representative of the United Nations Development Programme (UNDP) Jean Luc Stalon. Prime Minister Joseph Dion Ngute also attended the ceremony.

The Cameroonian government has selected the UNDP to manage the PPRD-NW/SW, which is valued at CFA89.682 billion. This reconstruction plan provides for the rehabilitation of 350 schools, 115 health centers, 40 bridges, 400 water points, 500 km of low-voltage power lines, 600 km of rural roads, 45 markets, and 12,000 houses. About 25,000 hectares of plantations will also be rehabilitated.

Some of Cameroon's partner countries make their participation in the PPRD-NW/SW conditional on the signing of a peace agreement. An example is France. "I had a long meeting with the Prime Minister, the bearer of the reconstruction plan, and told him that France will comply with the commitments made by Jean Yves Le Drian, the Minister of Foreign Affairs. But before reconstruction can begin, the region will have to be pacified. You will have to reach a peace agreement between the armed gangs and the government," said Christophe Gilhou, French Ambassador to Cameroon, who was a guest on CRTV's April 19, 2020 edition of Actualité Hebdo.