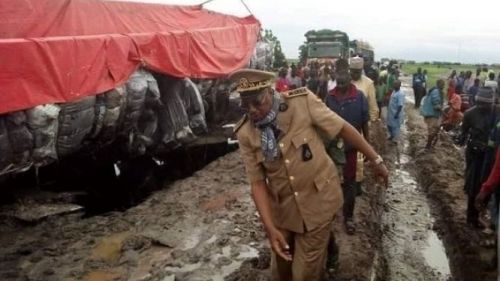 Midjiyawa Bakari, Governor of the Far North region, announced he has suspended traffic of trucks on the Mora-Kousseri national road.

The decision, which came into effect on August 5, aims to limit the advanced deterioration of roads, especially during this period of heavy rainfall. It mainly concerns large vehicles coming from Nigeria which are mostly overloaded, the governor says, stressing that he wants "to protect our road heritage from ruin and maintain regular traffic.” Indeed, the Mora-Kousseri section has been impassable for several weeks due to poor drainage and water stagnation, the area being flat. Also, the road has been suffering heavy deterioration for more than 30 years.

In 2014, the government launched work to rehabilitate the Maroua-Mora-Dabanga-Kousseri road, but the project was abruptly suspended after Boko Haram kidnapped 10 Chinese workers on the site. Only the renovation of the Maroua-Mora section (60 km) has been completed.