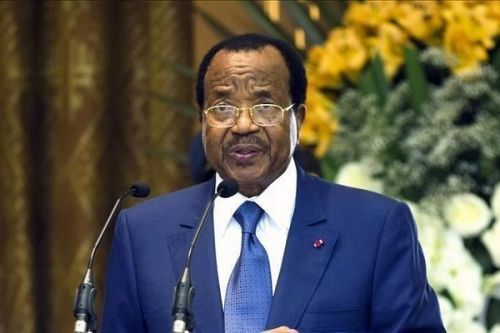 North-West: section leaders of the CPDM call for Paul Biya’s candidacy for the 2025 presidential election

Some 30 section leaders from the ruling party Cameroon People's Democratic Rally (CPDM) have solemnly asked the Head of State, Paul Biya, to stand as a candidate in the next presidential election scheduled for 2025. These section leaders (34 in total according to state media CRTV), from the North-West exclusively, submitted their requests to Prime Minister Joseph Dion Ngute.

The request was submitted through the Association des 34 présidents de section RDPC de la région du Nord-Ouest (Association of the 34 CPDM section leaders in the North-West). According to the “leaders”, the request was based on the policy carried out by Paul Biya (who is also the national president of the CPDM) in the separatist war ongoing in their region since 2017.

"The president is the father of the nation. We have seen a father who is ready to forgive all his children. Since the start of all those problems [ed. note: the separatist crisis and its consequences] in the North-West, he has always asked his children to come to him and surrender their weapons. We think that there are things we still need to learn from him. That is why the leaders of CDPM sections in the North-West have decided to call on the President of the Republic to run in the next presidential election," said Ujambeng Stephen Andong, coordinator of this association, according to comments reported by CRTV.

The association was initiated by Philémon Yang, former prime minister and head of the CDPM central committee’s permanent delegation in the North-West.

On October 30, 2021, in Monatélé in the Central Region, CPDM militants, under the leadership of Minister Eyebe Ayissi, displayed banners announcing Lékié residents’ “support for a possible candidacy of President Paul Biya in the 2025 presidential election.”

The support displayed was criticized by political actors and some of them, like Citoyens actifs du Cameroun (CAC), submitted a petition against it.

Let’s note that in the previous presidential election held in October 2018, President Paul Biya came out as the winner with 71% of the casted votes among nine candidates.