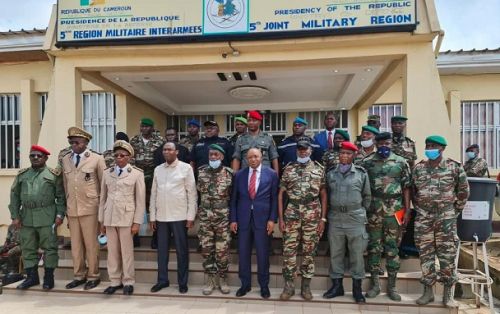 The Minister of Defense (MINDEF) Joseph Beti Assomo was dispatched to the North-West region on September 22, a few days after separatist attacks left some 15 army personnel dead. In his statement at the end of the crisis meeting held with the command of the 5th Joint Military Region, the MINDEF explained that the separatists are now getting increasingly sophisticated weapons and have human and technical support from abroad. Hence, he called for the assistance of some of Cameroon’s partners.

In a press release issued some days ago, the MINDEF had stated that the sophisticated weaponry these separatists  are systematically using now is the result of their connections with some terrorist groups operating outside Cameroon. The official communication does not name any country, however, Cameroon shares its entire western border with Nigeria.

The North-West and South-West regions, where separatist groups are active, border Nigeria, which hosts groups that are hostile to the federal government. Cameroon has always dreaded the consequences of a collaboration between Nigerian and Cameroonian separatists.  For that reason, during the Cross-Border Security Committee sessions, Cameroonian officials always reminded their partners of the importance of strict border control and intelligence sharing. In late August 2021, it delivered the same message.

Also, it repeatedly asked other countries where separatist leaders and financiers are based to hand the accused over to Cameroonian justice. In the US, six Cameroonian-born people were charged for illegally sending weapons to Nigeria with Cameroon as the final destination.