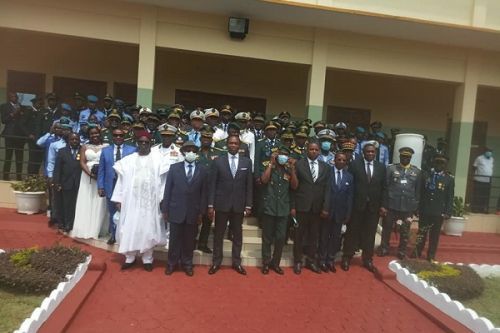 The Minister Delegate at the Presidency in charge of Defense (Mindef), Joseph Beti Assomo, awarded honorary medals (National Order of Valor, Order of Cameroonian Merit, and Knight of the Order of Valor) to 86 officers and non-commissioned officers from the military health corps, military engineers, and firefighters as well as to 8 journalists on May 17, 2021.

These decorations were awarded by the President of the Republic as a token of the nation's recognition for their participation in a humanitarian assistance mission in Equatorial Guinea in March.

"The men and women of this mission worked day and night. Even the civilian populations residing in Equatorial Guinea will remember this for a long time to come. Also, based on the reports received, the President of the Republic has decided to award exceptional distinctions to civilian and military personnel who took part in this mission," said Mindef. Regarding the men and women of the media, he said: "they have done war journalism in a field of the apocalypse.”

According to Joseph Beti Assomo, the work of this mission has strengthened the historical relationship between Cameroon and Equatorial Guinea. He also urged the recipients to always honor these distinctions.

It was an appropriate occasion to pay a heartfelt tribute to Lieutenant-Colonel Waziri Ousmanou Abba, a doctor, who died at the age of 43 from an illness contracted during this humanitarian mission.

The mission, led by Mindef and his colleague of Territorial Administration (Minat), Paul Atanga Nji, arrived in this neighboring country with "a large shipment of medicines, food and various supplies," according to a statement from the Presidency of the Republic.

The humanitarian assistance mission was deployed on Equatorial Guinea following a tragedy that occurred on March 7 in Bata, the country's economic capital, after several explosions in an armory in a military camp that killed more than a hundred people and injured more than 400 to varying degrees. A statement from the Equatorial Guinean government, issued shortly after the accident, also reported significant material damage.