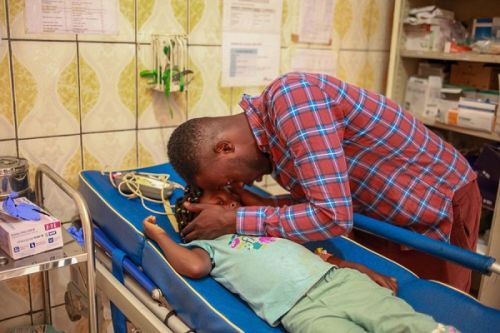 In a release published on June 22, 2021, international NGO Médecins sans frontières (MSF) expresses its disappointment with Cameroonian authorities’ decision to maintain the suspension of its activities in the Northwest. “Vital medical services have been denied for six months now, and this is taking an unacceptable toll on Cameroonians, many of whom have fled to the bush, unable to bear the sights, sounds, and threats of violence any longer,” declared  Emmanuel Lampaert, MSF Operations Coordinator for Central Africa, as cited by the release. On its Twitter account, MSF, therefore, launched the #LiftTheSuspension campaign to demand the lifting of this suspension.

In the framework of that #LiftTheSuspension campaign, a video is being shared. In the video, a community health worker can be heard saying that since the suspension of MSF activities in the region, many children have died in his community due to the lack of health care. “People have no money for their healthcare and they ask me when MSF will resume. People are still calling me but, as I can’t help them, they are obliged to return home. Sometimes, I hear about the death of some of them. This is horrendous! We can’t deny healthcare to the population… The suspension must be lifted Now!” he said.

For the MSF, the suspension of its operations in the region, caused by a conflict between the army and separatist militia is a serious violation of humanitarian rights. “As we speak, our community health workers see people die and suffer because of the lack of treatment available in villages and displaced communities, and our ambulance call center continues to receive emergency requests, which they are forced to decline (…)  What rationale can justify these unnecessary deaths?” Emmanuel Lampaert wonders.

MSF claims that in 2020, its teams “in the North-West region treated 180 survivors of sexual violence, provided 1,725 mental health consultations, performed 3,272 surgeries, and referred 4,407 patients by ambulance, of whom more than 1,000 were women in labor.”

MSF accused of colluding with separatists

The Cameroonian government is yet to react to the hashtag campaign but in May 2021, after the multi-day audience with government officials in Yaoundé, Stephen Cornish, executive director of MSF, was unable to obtain authorization for the resumption of activities.

“Although our visit was the opportunity to discuss key issues, no agreement was reached concerning an immediate resumption of our medical assistance mission in the Northwest, unfortunately. This is disappointing but we hope this suspension will be lifted in the coming days,”  he declared.

Since 2020, the Cameroonian government has been accusing MSF of helping separatists in the Northwest. According to the governor of the region, through its assistance to the Saint Mary Soledad hospital, MSF is helping take care of separatist fighters. However, the international NGO rejects those accusations reminding that it is committed to its charter “which requires the provision of healthcare without discrimination or heeding to political or religious affiliations, race or gender.”