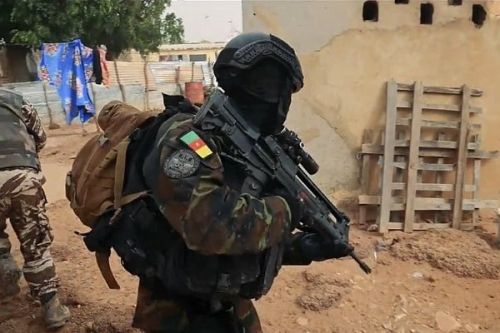 Anglophone crisis: about forty presumed separatists arrested in the Littoral

Following the attack attributed to the separatist militia at the residence of the director of the rubber factory of Cameroon Development Corporation (CDC), the government deployed the army on the ground.

Brigadier General Eba Eba Bede Benoit, commander of the 2nd military region based in Douala, explains that this initiative aims to thwart the actions of secessionist fighters. The operation conducted by the 2nd military region aims to spot the crime perpetrators and single them out of ordinary citizens. “The soldiers are professionally doing this and the population should know that the people we have sent to the field are carrying out their mission properly. We are assuring the population that we need their cooperation to be able to spot the bad guys,” the senior said.

Under this operation, the army found a large stock of ammunition, and some alleged separatists were also arrested. Colonel Eyenga Severin, commander of the 21st Motorized Infantry Brigade, reports that about forty suspects have been arrested, and operations continue to arrest more.

For the record, during the night of August 13, the CDC facilities were stormed by an armed band. In addition to the fire at the site, the assailants shot a 16-year-old student who died on his way to a hospital in Mbanga. The director of the rubber factory and three guards kidnapped by the militia are still missing. “The separatists came from the other side of Muyuka to commit the atrocities. At present, we are hunting them down,” General Eba said.