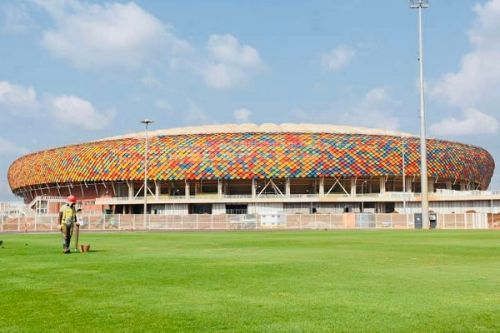 The Confederation of African Football (CAF) is once again voicing concerns over the Olembe stadium. The 60,000-capacity sports infrastructure located north of Yaoundé is to host the opening and final matches of the 2021 African Cup of Nations (AFCON2021).

The continental sporting event is scheduled to hold between January 9-February 6, 2022. However, construction works launched at the said stadium in 2017 are yet to be completed. Just a few weeks to the opening match, Minister of Sports and Physical Education (Minsep), Narcisse Mouelle Kombi, assures that the stadium will be delivered on time, while the CAF seriously doubt this.

"Regarding the delivery of the first phase of the Olembe Sports Complex, including the main stadium, the contractual deadlines set by Magil [the firm in charge of the construction works] remain November 30, 2021. This deadline was reiterated during my last two visits to this futuristic sports infrastructure on  November 10 and 20," 2021, said Narcisse Mouelle Kombi, also chairman of the Local Organizing Committee (Cocan), in a letter he sent on November 23 to the CAF.

The letter that leaked on the internet is a response to the letter Veron Mosengo-Omba, Secretary-General of the CAF, sent to the Cocan on November 17. In his letter, he expressed the CAF concerns and the actions expected to ensure a smooth organization of the soccer event. Concerning the Olembe Stadium, Veron Mosengo-Omba indicated that there seems to have been no progress in the construction of the exterior part of the stadium since the CFA last visited on October 22.

Countering that observation, Cameroon claims that since the last CAF visit, construction has progressed with 98% of the exterior roofing decorated with pangolin scales. Also, the Minister of Sports writes, the installation of tartans and giant screens have started while remaining works will soon be completed.

Yesterday Wednesday, November 24, CRTV, the state broadcasting corporation, published images of the Olembe Stadium on its Facebook Page. In those images, workers can be seen paving the running tracks.

Despite the justification, CAF is threatening to relocate the opening match if everything is not ready by November 30, 2021, the date set for the delivery of the stadium.

According to Veron Mosengo-Omba, measures are already being taken for the relocation and this would be an “unfortunate decision for  the Organizing Committee,  CAF, and Cameroon."

To that statement, the Minsep retorts that in no case will the Cameroonian government agree to relocate the opening match.

The stadium will be available

Narcisse Mouelle Kombi indicates that Cameroon has "taken all the necessary steps to ensure that this stadium [Olembe] is available and functional” for the matches.

He reaffirmed "the firm will of the State of Cameroon and the Cocan to respect its commitments" and reiterated the wish for a "cordial and harmonious partnership based on the respect of the parties and mutual trust for a smooth organization of this prestigious competition awaited by the whole continent with enthusiasm and restlessness.

This is not the first time that the Olembe stadium is at the heart of disagreements between Cameroon and the CAF. Last September, the Confederation declared that it had been misled about the progress of the construction works, which hosted the Cameroon-Malawi match [2-0] for the 2022 World Cup qualifiers. The match was played behind closed doors, as CAF considered that works have not progressed enough to ensure the well-being and security of the supporters expected for such a match.

For its part, the Cameroon Football Federation [Fecafoot] blamed restrictions related to the Covid-19 pandemic to justify the absence of spectators in the stands, after CAF rejected its request to have "at least 10,000 fans" in the stadium.