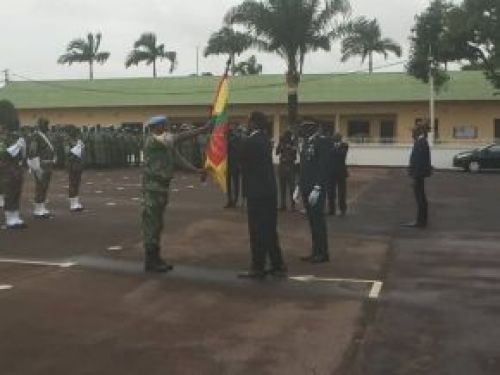 Cameroon welcomed home on October 23 the 6th Cameroonian contingent of the United Nations Multidimensional Integrated Mission for the Stabilization of the Central African Republic (MINUSCA). The ceremony was chaired by the Minister Delegate to the Presidency in charge of Defense (Mindef), Joseph Beti Assomo.

Deployed since September 2019, this contingent, composed of 1,100 elements, including 750 soldiers and 350 gendarmes (four lost their lives during this mission), has done a remarkable job. "I solemnly convey our warm and heartfelt congratulations to all the personnel of the battalion for having honored our national flag," said Mindef.

Indeed, among the contingents of 14 other countries, the Cameroonian battalion has distinguished itself by its professionalism and exemplarity. "Be worthy of the trust placed in you. By going there, you are also working for the security of our country," Joseph Beti Assomo told the Cameroonian Blue Helmets at the time of their departure for the Central African Republic.

The UN mission was established in CAR in April 2014. It has 14,189 uniformed personnel, 1,425 civilian staff, and 209 UN volunteers. Their missions included the protection of the civilian population or UN personnel and their property, the disarmament, demobilization, and reintegration of members of armed groups, and the promotion and protection of human rights.